Brian Smith BA ’93 slides a black vinyl disc out of its garish album cover, checks the surface for scratches, and, after a quick refresher on the mixing board from Becka Langum CAS ’11, cues up a record that probably hasn’t been played in the graffiti-strewn KLC radio booth since his student days: Devo’s new-wave “Theme from Doctor Detroit.”

As “Doctor Detroit” winds down, Ivan Drucker BA ’94 grabs the microphone and goes straight into his radio patter: “This is KLC Radio and Ivan X coming at you live on the Interwebs …”

Since its start in the 1950s, KLC has bounced around the AM and FM dials, enjoyed a golden age, and weathered some staticky patches. Today it broadcasts strictly via the Internet. But KLC has never stopped being the smart, eclectic—and sometimes edgy—voice of several generations of students at Lewis & Clark. Working at the station has been a formative experience for students over the years, as evidenced by the turnout of alumni representing five decades at the KLC reunion.

“Alumni sometimes have a stronger affinity for something like KLC than they do for their class year,” says Murray Cizon BA ’98, a former KLC music director who organized the reunion in his current job as associate director of alumni and parent programs at Lewis & Clark.

“I know when I think about my college days, I remember the hours and hours I spent at that radio station, and I think that’s the same for many of the alumni who attended the reunion.” 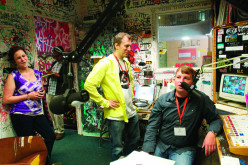 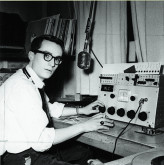 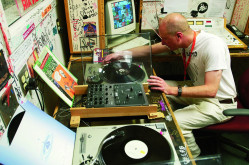 KLC continues to draw strong student interest today, with about 60 students currently involved with the station. DJs play a wide array of music, from jazz to rap to heavy metal, including a show dedicated to, as described on a station flyer, “shoegaze, ambient, dream pop, new weird American, freak folk, house and post-rock, acoustic … very mellow, delicate sometimes, spooky, awesome, beautiful music.” The station doesn’t cover news; however, it does broadcast an information/interview show for parents of first-year undergraduates, hosted by the dean and associate dean of students, called “Your Student and You.”

Langum, a senior psychology major from California and KLC’s current station manager, started DJ-ing as a first-year student for the same reason many students do. “I could play whatever I wanted, say whatever I wanted,” she says. “It’s a space to have fun and let loose.”

At the same time, students learn the fundamentals of broadcasting, from how to run a mixing board to how to prepare a show. The students on the station’s board of directors learn how to run a small organization, from budgeting to hiring to marketing.

“It’s a hands-on learning experience,” says Reed Kelly CAS ’11, an international affairs major from La Grande, who was station manager last year and now serves as hip-hop music director. “You get a fair amount of responsibility, and it’s very different from what you do in the classroom.”

The students involved with the station are always striving to reach a bigger audience—and streaming on the Internet gives them, in effect, a worldwide reach. But in some respects, how many ears are tuning in is almost irrelevant.

“The absence of listeners has never deterred the DJs,” says Stuart Kaplan, professor emeritus of communication. Kaplan retired earlier this year and was honored at Homecoming for his 30 years as the station’s faculty advisor. “That’s the charm of KLC.”

KLC started out in the mid-1950s broadcasting from various locations on campus, including a tiny shack where John R. Howard Hall now stands. A decade later, the station moved to a custom-designed studio in the basement of what was, at the time, the brand-new Templeton Student Center. During this period, the students’ focus was on professionalism, with the station airing daily news as well as music (everything from show tunes to rock and roll), broadcasting “away” football games, and even running commercials for area businesses.

The students in those days took their jobs at the station seriously, says Mark Thomas BA ’66, a semiretired former manager with NASA and the U.S. Department of Housing and Urban Development. “We ran the station similar to how a commercial station would run. We believed we were performing an important service to the school in both news and entertainment at the same time we were learning about broadcasting. I don’t like the way the station looks now to visitors (with the graffiti), but each generation is going to do things their own way.”

KLC’s golden age, according to Kaplan, may have come in the 1980s, a decade when college radio stations across the country flourished. During that time, a core group of KLC stalwarts transformed the station with new programming, new music, and new ideas. The mastermind of KLC during this period was student music director Dave Thompson BA ’84. A brilliant, sardonic, and ultimately unforgettable character with a passion for radio, Thompson is widely credited with almost singlehandedly revitalizing the station.

“Dave was visionary,” says former station manager Mike Lutz BA ’85. “He was a genius about music, and listened to everything from ambient to punk. Dave was the one who connected with everything and got everyone involved.”

Instead of striving to emulate commercial radio, KLC cultivated an irreverent, cutting-edge sound, playing indie rock bands such as R.E.M. (before they became mainstream) and the Replacements, which couldn’t be heard on most commercial stations, and embracing a wide range of sounds. 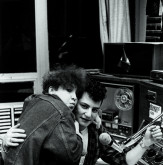 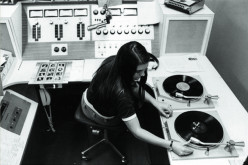 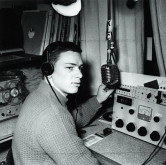 “The DJs were all over the place,” Lutz recalls. “There was nothing cogent or coherent about the programming. That was the beauty of it, that was the magic.”

For all the new music brought in, Thompson created a storage room dubbed “The Cave” because DJs had to climb into the tight space to retrieve records. Years later, when the station moved to its current studio on the ground floor of Templeton, the music room was dubbed “The Cave II.” A plaque honoring Thompson was placed on the door to the room, where hundreds of LPs from the 1980s (including the aforementioned “Doctor Detroit” soundtrack) still bear cover stickers with his meticulous handwritten notes.

Sadly, Thompson died last March of cancer at age 46. In Thompson’s honor, KLC alumni at the reunion literally passed around a hat—a red baseball cap of the type that was always perched on Thompson’s head—and raised $1,000 to buy new station equipment.

The 1980s also was when KLC launched the annual Sunburn music festival, a formerly outdoor and now indoor concert that has, over the years, brought to campus both up-and-coming and big-name acts such as the neo-swing act the Cherry Poppin’ Daddies and the psychobilly band the Reverend Horton Heat.

“It’s still a big thing,” says Kelly, who has helped organize the spring concert since his first year at Lewis & Clark. “We book tons of bands, and it’s always pretty packed—a bit of a madhouse, actually.”

Not surprisingly, KLC has generated its share of static over the decades. Kaplan recalls a minor ruckus with a “Naked Radio” show in which the student DJ broadcast au naturel. During periods when the station broadcast a signal that could be heard off campus, occasional citizen complaints have come in about the content of shows. Because of its limited range, KLC has never been regulated by the FCC, and now, as an Internet-only station, it has free rein on what it broadcasts.

“KLC students do have the reputation of being rabble-rousers,” says Cizon. “I remember a lot of shenanigans,” like the time on-air DJs used a rusty machete to hack apart Celine Dion CDs.

The biggest KLC controversy—one that still stings for some alumni today—was the proposed move, in the early 1990s, from the basement of Templeton to its space on the ground floor. Students were vehemently opposed to the switch, based on technical and sentimental grounds, and fought the administration for years. In the end, KLC was forced in 1995 to move to its current quarters, where students promptly made themselves at home by “redecorating” every square inch of walls and ceiling with graffiti.

Throughout its history, KLC has aimed to expand its reach. For most of its early existence, the station broadcast on a “common carrier” system. To get reception on the AM dial, a radio had to be plugged into an outlet on campus; a car or transistor radio could not pick up the signal. Various efforts through the 1960s and ’70s to acquire an FM license from the FCC—a move that would have meant a bigger audience, but more regulation— ultimately fell short. 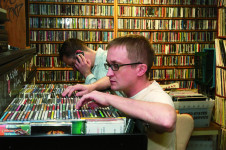 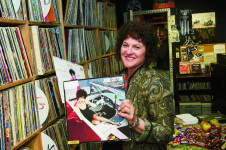 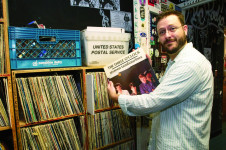 During the 1980s, KLC, with the help of various enterprising students, started broadcasting on FM. Around 1984, a jerry-rigged antenna—“shaped like a coat hanger,” according to Kaplan—on the roof of Templeton started transmitting the station’s signal. The signal was just one-tenth of a watt, but it was strong and clear on campus. The problem, Kaplan soon discovered, was that the signal was too strong. He could still pick up the station on his car radio driving across the Columbia River into Washington. Concerns about potential FCC fines led the station to scrap that antenna. Later, the station devised a plan to install some 50 small transmitters in residence halls across campus, but technical difficulties doomed that project.

For more than a decade now, KLC has been broadcasting on the Internet, and the station can be streamed live, 24 hours a day, at KLC Radio.

Listener statistics are hard to come by (as they were in the days when the station was on the airwaves), but KLC’s reach is bigger than ever, thanks to the Internet. On one recent day listeners from places as far-flung as New Zealand and Finland tuned in to KLC Radio.

“I’d argue that right now is just as much of a golden age for college radio as it was 30 years ago because you have so many more opportunities to reach your audience with the Internet,” says Rev. Moose, editor in chief of the College Music Journal. “The challenge that college stations face these days is the same challenge they have always faced: ‘How do you make yourselves relevant?’ And there’s no set answer to that question. You just bust your ass every day and do everything you can to get people to listen.”

Which is what the current KLC student leaders are doing. The station’s focus now is on improving marketing on campus and getting a wider range of students involved with the station, both as DJs and as listeners.

One thing that has not changed over KLC’s 50-plus years— whether broadcasting over AM, FM, or WWW; airing news, radio dramas, or game shows; or playing the Kingston Trio, Nine Inch Nails, or Vampire Weekend—is the students’ commitment to the station.

Their affection was in evidence at the fall reunion. As alums mingled with current students, they reminisced about the good old days, picking up on 25-year-old arguments about whether Elvis Costello’s best album was My Aim Is True or Get Happy!!

“It was neat to see all the people who have been at KLC through the different eras,” says Reed Kelly. “I felt I was a part of something much bigger, something that had been around a long time and that will definitely go on in the future.”