“In order to push knowledge to the next level, you have to know how to ask questions,” says Claire Fassio BA ’09, a graduate student in molecular biology at the University of California at Berkeley. “My time at Lewis & Clark made that abundantly clear.”

Asking questions, finding answers, asking more questions—it’s all part of the work of Lewis & Clark students who study the sciences. Through one-on-one collaboration with faculty researchers, students engage in lab experiences most often reserved for those pursuing graduate work. In the process, they develop a platform for future accomplishment in their careers, whether in business, education, or the nonprofit sector.

The larger science community is validating Lewis & Clark’s approach. In 2010, the National Science Foundation awarded prestigious graduate research fellowships to eight Lewis & Clark alumni, including Claire. The number surpassed the total number of fellowships awarded to alumni of Reed, Willamette, and the University of Puget Sound combined. It also set a new record for Lewis & Clark.

We caught up with four of the new research fellows to find out what got them interested in science, what questions they are investigating in their research, and what they hope to contribute to the world.

Is the city any place for a frog?

With urban areas expanding and natural places shrinking all over the world, “a lot of species are going to have to figure out how to live among us if they’re going to have any chance at all,” says Katie Holzer. For the last several years, she has made it her mission to ensure that a few species of frogs and salamanders, at least, stand a fighting chance.

Now in her second year of graduate school at the University of California at Davis, Katie is studying urban ecology, which she describes as “the study of non-human species living in human-dominated landscapes.”

Her abiding affection for urban amphib- ians began with her senior thesis at Lewis & Clark. Katie worked with Portland city about amphibian movement and pond colonization in the Oaks Bottom Wildlife Refuge. The city was so pleased with her work that it funded a grant for her to continue working with the Bureau of Parks and Recreation for a year after she graduated.

In that job, Katie worked closely with city managers to investigate how many species of frogs and salamanders live in Portland (ten), where they are (“everywhere!”), and what changes would improve their ability to survive in the urban environment. The city is adopting many of Katie’s recom- mendations, and is already seeing some amphibian populations flourish as a result.

In her doctoral research, Katie works with the same city managers—and, in all likelihood, with some of the same frogs. During frequent visits to Portland this spring, she will don rubber hip waders and head for the ponds, tracking frogs that she tattooed last year and taking DNA samples from additional subjects. Back at Davis, she’ll use sophisticated computer mapping software to develop a detailed sense of where the amphibians are and how they are moving around.

Katie plans to contrast her Portland studies with similar field studies in Hanoi, Vietnam. “In the future, I’d love to work in a developing country like Vietnam, where urban areas are growing rapidly and there’s still a lot of biodiversity,” she says. Her hope is to continue to work with city planners and managers, wherever she lands, to make cities better places for wildlife to coexist with humans, and better places for humans to connect with nature.

“So many people don’t have the resources to get out of the city and see the remaining natural areas,” says Katie. “If we had more places within the city where kids could see a few species of birds and frogs, and maybe hold a tadpole in their hands—that’s the kind of experience that not only improves the quality of life for people, but also inspires them to want to help conserve the natural world.” 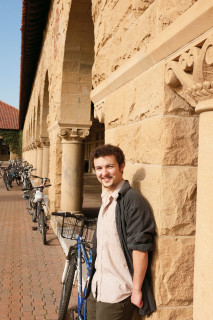 How does the brain make connections?

Conor Jacobs is just settling into his first year of graduate school at Stanford University. In his current lab rotation, he is studying neurocircuitry—the ways in which neurons connect in the brain to drive specific behaviors that are essential for survival.

“Getting interested in neurobiology wasn’t a big leap for me,” says Conor. “I’ve always thought the brain was fascinating, but working in Janis Lochner’s lab at Lewis & Clark galvanized my interest.”

As part of the Lochner lab, Conor explored questions regarding the proteins and processes that underlie long-term memory formation. He helped coauthor a paper that Lochner, Pamplin Professor of Science, and Bethe Scalettar, professor of physics, published on this work. He also contributed to a second paper that is nearing publication.

While that was one highlight of Conor’s Lewis & Clark experience, studying Mandarin in Beijing was another. “It was a cool self-exploration,” says Conor. “I was kind of experimenting on myself by taking a break from science altogether and immersing myself in learning a new language. I definitely felt my brain exploiting new pathways.”

In his current lab at Stanford, Conor helps study the brain pathways of fruit flies. “I’m working on genetic manipulations that you can introduce into flies that allow you to light up selected neurons in the brain to make it easier to study those cells as a population,” he explains, as if it were just that simple. The complicated process involves copying a specific piece of fly DNA (the piece related to the type of brain cell you want to illuminate) and a specific piece of jellyfish DNA (the piece responsible for creating fluorescence in jellyfish) and splicing them together. The newly spliced piece of DNA then gets injected into a fly embryo. If everything works, a strain of these flies, with their glowing neurons, can be bred and used for a wide range of experiments.

All of this, says Conor, has the potential to better inform our understanding of our own brains. “Sure,” he acknowledges, “we’re working with flies. But it’s very likely that the principles that form their neuronal circuitry and architecture are similar to what’s going on in our own brains.”

In Conor’s brain, there’s a lot going on. He is soaking up knowledge at every opportunity, and making new connections with each new piece of information he acquires. “Everything you learn adds to everything else you learn,” says Conor. “I like watching that tapestry unfold.”

Conor’s future plans are still being written, so it’s too soon to tell what contribution he may one day make to the world. “But if you do want to make a contribution,” he says, “I think that science research is a good way to go about it.” 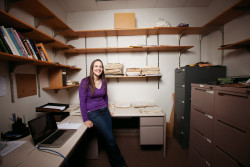 How do baboons make up after a fight?

By the time this magazine is printed, Andrea Bailey will be hanging out with baboons in western Tanzania’s Gombe National Park. Andrea is in her second year of studying animal behavior in the University of Minnesota’s Graduate Program in Ecology, Evolution, and Behavior. Her research focuses generally on the social behavior of baboons, and specifically on reconciliation in males.

“These baboons live in a big social group, so there’s a lot of aggression that goes on,” says Andrea. “After an aggressive encounter, they often engage in what we call ‘postconflict affiliative behaviors’”—science-speak, she explains, for making up.

Andrea is exploring a theory that baboons reconcile preferentially with individuals that are of value to them. For example: “Lower-ranking males will often form coalitions to try to take over mating opportunities from higher-ranking males, which gives them a chance they might not otherwise have to produce offspring. I’ll be looking at whether males in these coalitions are more likely to reconcile with each other than with other males.”

To collect her data, Andrea will spend hours in the forest each day, conducting “focal follows.” Selecting a male baboon at random, she will follow its every movement and record all of its behaviors and interactions. After a couple of hours, she’ll switch to another baboon—and so on, for about seven and a half months. “It will be interesting,” she says, “studying their relationships and what they do to maintain them.” The answers could lead to a better understanding of behavior in other species, and perhaps even in humans.

Andrea points to two key experiences at Lewis & Clark that led her down this path. The first was an animal behavior class with Kenneth Clifton, associate professor of biology. “Learning about the theoretical underpinnings of behavior got me so interested that I went on to do my thesis with Ken,” says Andrea.

The second was a semester abroad in Tanzania. “That played a huge role in solidifying my interest in that area of the world,” she says. “I honestly don’t think I would be doing what I’m doing now if it hadn’t been for my experiences at Lewis & Clark.”

Between her undergraduate studies and graduate school, Andrea taught high school biology for three years, passing on her love of science to her own students. “You can look up facts if you need to,” she says, “but it’s the ability to reason your way through things that’s really important. Lewis & Clark did a great job of emphasizing that, and it’s something I tried to emphasize in my own teaching.”

After graduate school, Andrea says, “I fully intend to teach. I want kids to know that there’s an unlimited number of questions out there that you can ask about stuff, and there’s no one right way to find the answers. Science should be a very fun, exploratory thing.” 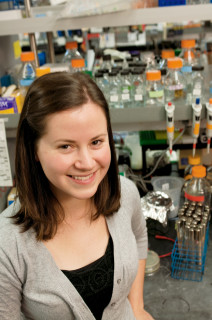 Does the shape of a chromosome affect gene expression?

In her research at the University of California at Berkeley, Claire Fassio hopes to find answers to some big questions in a tiny worm. “C. elegans [the worm in question] is barely visible to the naked eye,” says Claire. “It looks like a tiny transparent squiggle.” With the help of a microscope, the second-year graduate student in molecular biology spends a large part of her day probing, injecting, dissecting, and inspecting these tiny squiggles (shown lower right).

Claire’s first introduction to C. elegans was in a cell biology class taught by Greg Hermann, associate professor of biology at Lewis & Clark. “A lot of geneticists study these guys,” Claire says. “Due to the worms’ transparency, you can see what’s happening inside them. And they reproduce quickly and copiously, so you always have plenty of subjects for your studies.”

In the Meyer lab at UC Berkeley, Claire’s research focuses mainly on how the worm’s two genders—male and hermaphrodite—compensate for their chromosomal differences.

Claire credits Lewis & Clark with turning her on to biology. “I wasn’t sure what I wanted to study,” she says. “But in my first biology class, we were given the freedom to decide what we wanted to ask and how we were going to test it. That was the first time I realized that science wasn’t just memorizing a bunch of things—it had more to do with being creative.”

It’s that creativity that keeps her fascinated with science. “In order to push knowledge to the next level and actually create something meaningful, you have to know how to ask questions that you can provide insight into,” says Claire. “My time working in biology professor Deborah Lycan’s lab, and in just about every class I took at Lewis & Clark, made that abundantly clear.”

While the questions she is asking today may seem focused on minutiae, Claire never loses sight of the bigger picture. “On the one hand, I’m studying a group of proteins in this tiny worm that nobody can see,” she says. “But I have to remember that I am putting together one very small piece of a much greater puzzle. If everyone does the best possible job of bringing their one little piece to light, in the end, we are going to have a better understanding of a lot of things.”

Ellisa Valo is a freelance writer in Portland.