Imagine sailing with Charles Darwin on the HMS Beagle in the 1830s; puzzling with him over the geographical distribution of wildlife and fossils; and watching him synthesize his ideas into a coherent theory that would forever change the world of science.

Nicolle Rager Fuller BS ’99 makes this journey possible. She illustrated Charles Darwin’s On the Origin of Species: A Graphic Adaptation (with author Michael Keller; Rodale Books, 2009). The book transforms Darwin’s 1859 classic, along with excerpts from the English naturalist’s letters and field notes, into a graphic novel. 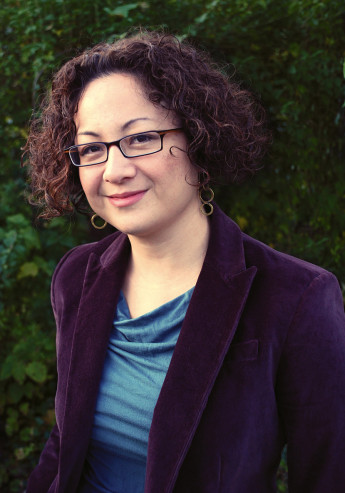 Nicole Rager Fuller BS ’99The book is aimed at younger readers but has appeal for readers of all ages and cultures. To date, it is available in Dutch, Korean, Turkish, and Indonesian as well as English. Keller and Fuller place Darwin’s discoveries in historical and cultural context and show how he and his scientific contemporaries influenced one another.

From the beginning, Fuller understood the magnitude of illustrating Darwin’s foundational work. “In some ways, On the Origin of Species is a sacred text,” she says. “It also has the potential to offend some people. I worked hard to keep it accurate but still interesting.”

Working primarily digitally while emulating an ink and watercolor style, Fuller created a thousand illustrations for the book. She uses a pressure-sensitive monitor that allows her to draw directly on the screen, translating her traditional training to a digital format. In On the Origin of Species, her delicate, warm imagery evokes a naturalist’s sketchbook. She created the book’s font based on her own handwriting.

Fuller’s approach has caught the eye of critics. On the Origin of Species was nominated for two 2010 Will Eisner Comic Industry Awards in the categories of Best Adaptation from Another Work and Best Painter/Multimedia Artist (interior art). “The Eisners are the Oscars of the graphic book world,” says Fuller.

When I started working in science, I was amazed by how much creativity it takes. Thinking differently is what leads to discovery. Nicolle Rager Fuller BS ’99

On the Origin of Species is Fuller’s first graphic novel but hardly her first published effort. Her scientific illustrations have appeared in Science News magazine, Scientific American, the Washington Post, and elsewhere. She also heads her own firm, Sayo Art.

Fuller’s career combines her lifelong interests in science and art. “My parents encouraged both,” she says. “When I was a kid, they enrolled me in drawing classes, and they both did science projects with me.”

Fuller grew up in Bellingham, Washington, and considers herself a “West Coaster” despite currently living in Washington, D.C. She majored in biochemistry at Lewis & Clark but also took drawing and ceramics classes. “Art became my stress relief,” she says. Her choice of major was partly influenced by her regard for Janis Lochner, Pamplin Professor of Science and chair of the biochemistry and molecular biology program, who served as her advisor. “The chemistry faculty, including Associate Professor Barbara Balko, were very supportive of my mixed interests,” Fuller says. “I’m still thankful for that.” In the art department, Ted Vogel in the ceramics program and Debra Beers in the drawing program also encouraged her efforts. “Professor Beers thought my weird combo of interests made a lot of sense. Intense observation is crucial in both art and science,” says Fuller.

After college, Fuller briefly considered a career in art therapy and then worked in a science lab at Oregon Health & Science University. But when she discovered the science illustration program at the University of California at Santa Cruz, she knew she had found her calling.

Fuller finds that her art and science backgrounds complement each other. “When I started working in science, I was amazed by how much creativity it takes,” she says. “Thinking differently is what leads to discovery.” She finds that her science background allows her to ask informed questions and to understand technical articles in journals. “An illustrator with an exclusively artistic background might need to work harder at understanding the science,” she says.

Fuller can also consult her husband, Jason Fuller, an entomologist who chairs the biology department at the Takoma Park/Silver Spring campus of Montgomery College in Maryland. “He’s my sounding board for content,” she says. “Over the course of my career, he’s learned to be my art critic.”

Though the book is Fuller’s first, it may not be her last. “I’d like to do an entire book, writing and all,” she says. She also has two brothers who write: Matt Rager, who is completing a PhD in literature at Yale, and Adam Rager CAS ’11, an English major at Lewis & Clark. Fuller would also love to illustrate a children’s book. “I’ve tasked my brothers to help me with that when we all have time.”

In illustrating Darwin’s On the Origin of Species, Fuller aimed to evoke “the excitement of finding things out.” Her goal was give readers a new perspective on a classic work and perhaps, like all good scientists artists, help spark some entirely new ideas.

Genevieve J. Long is a Portland freelance writer and editor.