The campus of Lewis & Clark College is a very special place. The 137-acre site occupies the height of land in the predominantly residential Palatine Hill area of southwest Portland. The character of the campus is cast by its setting on the grounds of the former “Fir Acres” estate, with its landmark manor house overlooking a magnificent formal garden mall with views eastward to the Willamette Valley and the white cone of Mt. Hood beyond. The campus is framed by Douglas fir woods in the ravines and slopes at its edges - a classic northwest landscape that serves to unify the campus. 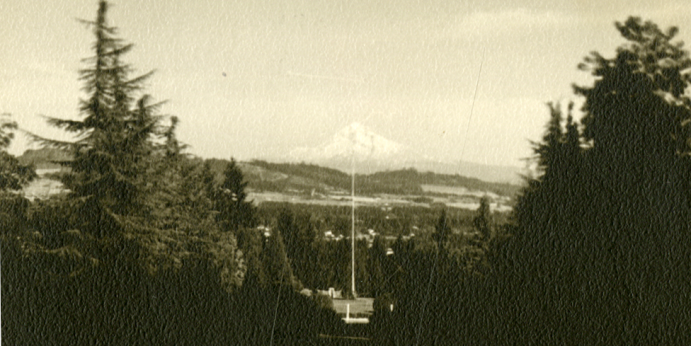 The acquisition of Fir Acres from the Lloyd Frank estate in 1942 for $46,000 was hailed as a symbol of Lewis & Clark’s transformation as the “Cinderella School of the Pacific Northwest.” Having established itself as a growing four-year college in Portland after years of struggle and perseverance as Albany College, Lewis & Clark had finally found a location and an environment fitting an aspiring liberal arts institution. It was the vision of then-president Morgan Odell in 1944 that Fir Acres would be the setting for major postwar growth of the College. Doctor Odell’s 1944 master plan pictured a campus developed formally on the garden mall axis below the Manor, with a cross-axis extending from the mall area of the Albany Quadrangle. 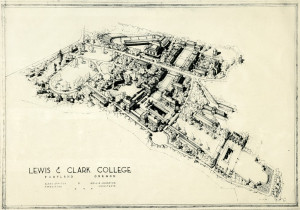 1944: The prospective campus.The development of the campus did not materialize along the classical lines envisioned in the 1944 plan. Rather, the campus evolved as a series of relatively individualized buildings and enclaves typical of the 1950s and 1960s. And, of course, Dr. Odell’s 1944 image of the campus did not anticipate the number of automobiles that would have to be fitted into the intricate setting at the top of Palatine Hill. In spite of the somewhat random development pattern, however, the integrity of the old estate grounds and their surrounding woods remains largely intact.


In 1965 Northwestern College of Law merged with Lewis & Clark College and offered evening courses.  In 1970 the College dedicated the new Law School facilities on a 20 acre tract between Boones Ferry Road and Terwilliger. 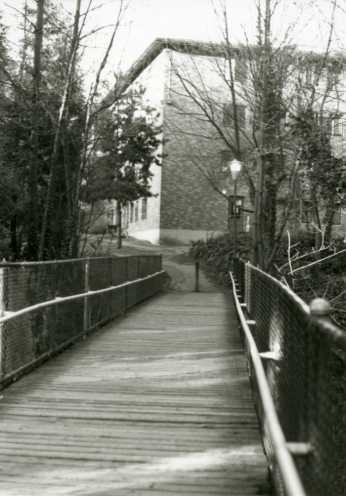 1989: The bridge.In 1984 Graduate School of Professional Studies brought together various master degree programs of the college. Housed in Albany Quadrangle and several surplus World War II buildings that were moved to Campus in the 1940’s from nearby military bases, the graduate school found itself bursting at the seams in the late 1990’s. In 2000 the College acquired the neighboring Franciscan Renewal Center formerly the Hamilton Corbett Estate.  The Estate had a similar history to the Frank Estate.  Built in the late 1920’s, the Corbett’s sold their estate to the Franciscan Nuns in 1942 and the property became a convent and later a renewal center. When the college purchased the property, the Center building was extensively remodeled and became Rogers Hall and the home to the Graduate School of Education and Counseling.


The exquisite setting of Lewis & Clark is, in fact, its greatest asset and its greatest challenge as a framework for future growth and change. The asset must be preserved and enhanced. But the complex topography of the site, coupled with a development pattern made up of disparate building forms interwoven with an obtrusive network of roads and parking areas, forms a fragmented campus environment that must be made more cohesive. The challenge then, is to allow for cohesive growth to take place in a way that is sympathetic to the intimate scale and texture of the estate setting.


The educational philosophy of the College lends to the mandate that the campus should be a place that fosters social and intellectual contact at many levels. In addition to hosting a mix of undergraduate, graduate, and professional students that is quite remarkable for a liberal arts institution of 3,700 students, the College sustains a vital and growing international program of study abroad. The need is thus for a campus that is attractive to students with an exceptionally diverse set of backgrounds and interests, and one that allows for the fullest exchange of those interests.

No Carriages and Other Stuff

Presentation given to Admissions tour guides with bits of facts and information about the college and estate history.