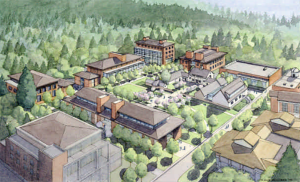 Illustration of the prospective view facing northeast.The campus master plan reflects a consensus that was reached during a six-month process that engaged a wide spectrum of the Lewis & Clark community. A series of intensive on-campus workshops was conducted with the College’s Master Plan Steering Committee, augmented by meetings with nine topical focus groups and several open forums. The resulting plan is based on three fundamental strategies for the Lewis & Clark campus as it enters the 21st Century:

Indeed, the intent of the master plan is to regard the campus of Lewis & Clark College as an “Academical Village” - a place where living, learning and discourse can be carried out as an integrated experience. It is fitting that Thomas Jefferson’s notion of the “Academical Village” should be vested in the institution named for the explorers that he sent to the Pacific Northwest even as his great university was taking shape.

The master plan is described hence in terms of the four major zones of the campus that will undergo changes and improvements designed to enhance the vitality of each area, while lending to a more unified and attractive campus as a whole.

Read About The Manor Grounds