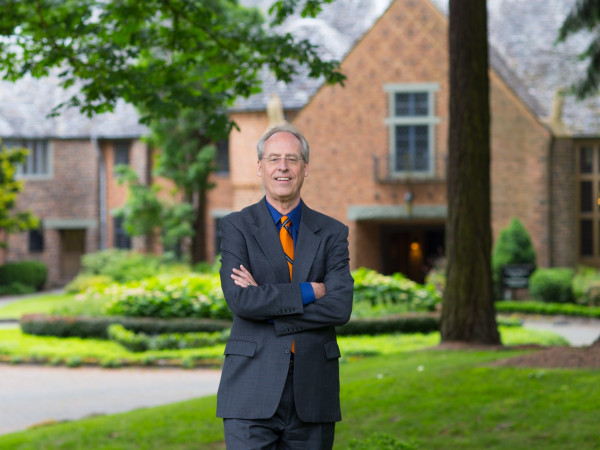 Wim Wiewel is Lewis & Clark’s 25th president. He took the helm on October 1, 2017, after nine years successfully leading Portland State University. Under his tenure, PSU became the largest and most diverse university in the state. Retention and graduation rates increased every year, while funded research went up 50 percent, and fundraising tripled. His leadership earned him a 2014 CASE (Council for Advancement and Support of Education) Chief Executive Leadership Award.

A recipient of a classic liberal arts education as a high school student in his native Amsterdam, Wiewel learned early on the value of a broad-based education rooted in critical thinking and analysis. The first in his family to go to college, he holds degrees in sociology and urban planning from the University of Amsterdam and a PhD in sociology from Northwestern University.

Wiewel is a proponent of strong civic engagement, which benefits both the college and the community it calls home. He has served on a number of prominent business and culture organizations, including the Portland Business Alliance, All Hands Raised, Regional Solutions, and the World Affairs Council of Oregon.

A vocal advocate of teaching and practicing sustainability, Wim works closely with civic, business, and academic leaders to drive collaboration. His first year at Portland State, Wim secured a $25 million sustainability research grant from the Miller Foundation. He even invited students to tear up a section of the presidential house’s yard to put in a permaculture garden. Wim received the 2012 inaugural Presidential Leadership Award from the U.S. Green Building Council’s Center for Green Schools. He also garnered a Climate Leadership Award from national nonprofit Second Nature in 2013 for demonstrating innovative and advanced leadership in education related to sustainability and climate mitigation and adaptation.

A sociologist with a passion for strong cities, Wiewel has authored or edited nine books and more than 65 articles and chapters that have appeared in such publications as Economic Geography, and the Journal of the American Planning Association. His most recent books are Global Universities and Urban Development and Suburban Sprawl.

Wim is married to the architect Alice Wiewel and together they have four children. Admirers of Portland’s eclectic cultural offerings and of Oregon’s amazing natural beauty, Wim and Alice take time to explore the mountains, coasts, and deserts. They also attend lots of performances and games in town, and frequent community receptions and dinners.