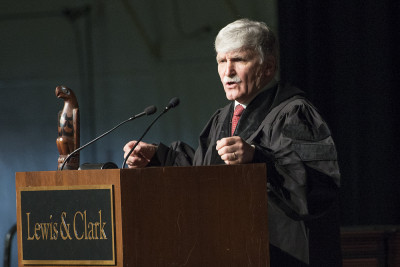 The Honourable Roméo A. Dallaire, Senator, has had a distinguished career in the Canadian military, achieving the rank of Lieutenant-General and becoming Assistant Deputy Minister (Human Resources) in the Department of National Defence in 1998. In 1994, General Dallaire commanded the United Nations Assistance Mission for Rwanda (UNAMIR).

His book on his experiences in Rwanda, entitled Shake Hands with the Devil: The Failure of Humanity in Rwanda, was awarded the Governor General’s Literary Award for Non-Fiction in 2004.

His book They Fight Like Soldiers, They Die Like Children: The Global Quest to Eradicate the Use of Child Soldiers, was published in 2011.

As a champion of human rights his activities include:

General Dallaire’s message is powerful in its simplicity and challenging in its scope:  never again!

“All humans are human. Not one of us is more human than another.”

Lieutenant-General The Honourable Roméo A. Dallaire

Lieutenant-General and Senator Roméo Dallaire returned to the Lewis & Clark College campus in 2013 as the College of Arts & Sciences commencement speaker and recipient of a Doctorate in Humane Letters, Honoris Causa.

During his moving address to graduating seniors, General Dallaire reminded students “Your responsibilities go well beyond your town, your state, the borders of your country.” He further stated that when a great nation has power “it has a responsibility well beyond its border, to humanity.”

The Dallaire Scholarship Committee looks forward to working with General Dallaire in supporting his humanitarian efforts throughout the world, and in maintaining the scholarship that bears his name. 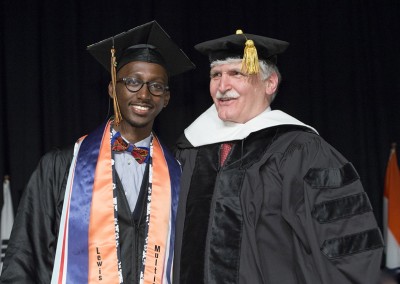 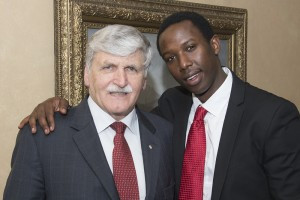 In 2016 we celebrated the 10th year of the Dallaire scholarship. In recognition of this milestone, General Dallaire sent this message:

Not so many years ago I witnessed to what extent adults can manipulate the minds of youths that pushed them to commit some of the most horrific crimes against humanity during the Rwandan genocide.

Over the last 10 years, since my initial research during my fellowship at the Kennedy School at Harvard, I have been pushing to frontiers of eradicating the use of child soldiers in civil wars and conflicts worldwide. My team at Dalhousie University, where the Roméo Dallaire Child Soldiers Initiative is accommodated, has been able to change the doctrine in NATO, in the African Union and a number of individual countries for their security sector forces to be more effective in reducing the use of child soldiers in conflicts. The website childsoldiers.org is a most valued information site on this matter.

The General Roméo Dallaire Scholarship is one of the precious instruments of developing, in a most rigorous intellectual manner, the thinking of future leaders in their country to be able to discern and prevent their nation stumbling into civil war, mass atrocities and even genocide. The recruitment of child soldiers is in fact an early warning to such extreme abuses of human rights.

It is with humility, yet tremendous pride, that I salute the previous graduates and those that will join them in the future to work diligently and intelligently at preventing conflicts and eradicating the use of children as weapons of war.

Bravo to the university leadership and many thanks for their continued support.