History of the Project 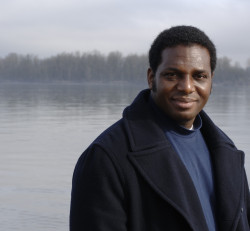 The York Project began with one student, Charles Neal JD '07 (pictured), and a question about the slave who served as a vital member of the Lewis and Clark expedition: Where was York represented on the campus of the college that bears the famed explorers’ name?

The answer was “nowhere.”

A third-year law student at the time, Neal committed himself to changing that, and when he was able to enlist a core of committed students and key members of the college administration and faculty, the York Project was born. "I thought about the indignity York felt," Neal explained, "and I had to do everything possible to move the project forward"

Neal—along with fellow third-year law students Eric Hevenor, Sara Bagheri, and Matthew Abosedra—approached then-President Thomas Hochstettler, who immediately embraced the idea of recognizing York. He approved the formation of a project team and charged it with the task of building a memorial on campus.

The York Project began with one student and a question. It has gone on to become much more.