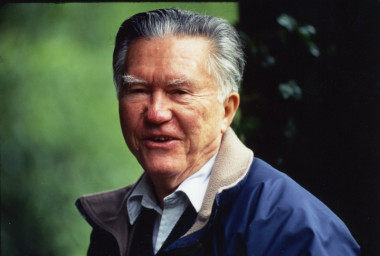 Throughout the Stafford Centennial Year, we will revisit several of the poet’s publications and enjoy many associated works being produced by scholars and poets today. Our shared reflection of words old and new will provide a foundation for the Centennial Year and beyond.

The Oregon Library Association’s 2014 “Everybody Reads” program will focus on the work of William Stafford. Over seventy libraries statewide will have public programs, and there will be books and materials on hand to support conversations, readings, discussion groups, and other activities around the legacy of William Stafford as a writer, teacher, and witness for peace. The following books are designated for this program: 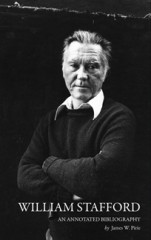 In August of 2012, Lewis & Clark College Special Collections staff completed the compilation and editorial work for the first comprehensive bibliography of the publications of William Stafford. Based on nearly fifty years of research began by James W. Pirie in the 1960s, the 544-page book provides bibliographic information for all known editions of Stafford’s books, translations, editorial work, broadsides, serial publications, appearances in anthologies, archival collections, and a listing of major criticism. The book also includes a 100-page index of every poem title, book title, name, and publisher that appears in the bibliography. This book is a must-have for Stafford scholars and anyone doing work in the Stafford Archives.

We Belong in History (forthcoming in 2014)

Ooligan Press (Portland State University) organized a statewide writing competition for seventh through twelfth graders during the 2012-13 school year. Organizers provided teachers lesson plans based on Stafford’s poems to help inspire middle and high school students to create their own essays and poems. An anthology of the best work will be published by January 2014 with the title We Belong in History. The competition is a great way to celebrate Stafford, who considered reading and teaching to be essential parts of human life.