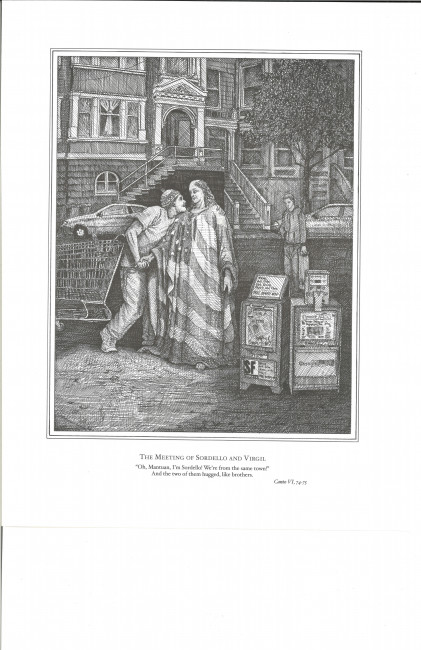 About halfway through my pathetic life, I woke up and found myself in a stupor in some dark place. I’m not sure how I ended up there; I guess I had taken a few wrong turns. — Dante in Sandow Birk and Marcus Sanders, Dante’s Inferno (San Francisco: Trillium Press, 2004).

Police helicopters descend upon the streets of Los Angeles. Gas-guzzling SUVs overtake the streets of San Francisco. Fast-food emblems and corporate logos dominate the American landscape. Is it the 24-hour news channel, or a 21st-century take on a 14th-century classic? In 2003, artist Sandow Birk (with writer Marcus Sanders) relocated Dante Alighieri’s epic poem The Divine Comedy into contemporary urban America. In his illustrations for the three books (Inferno, Purgatorio, and Paradiso), Birk depicted Dante as a sneaker- and hoodie-clad slacker. Accompanied by the ancient Roman poet Virgil, Dante journeys through the circles of Hell to Purgatory and Paradise, presented as versions of modern American cities. Birk transformed a centuries-old classic into an imaginary narrative with political relevance for today’s audiences.

Also included in the exhibition are selections from Birk’s American Qur’an, a project in which Birk hand-transcribed the entire Qur’an according to historic Islamic traditions and to illuminate the text with relevant scenes from contemporary American life. Nine years in the making, the project was inspired by a decade of extended travel in Islamic regions of the world.

All works are courtesy of Koplin Del Rio Gallery, Seattle

Reception for the artist