Members of the Society, which emulates the purpose and standards of the Rhodes Scholar program, represent an exceptional blend of intellectual talent, dedication to the welfare of one’s community, the habit of physical fitness, and personal integrity. Each fall, the society inducts seven students as they begin their second year at the College.

Learn about this year’s inductees below: 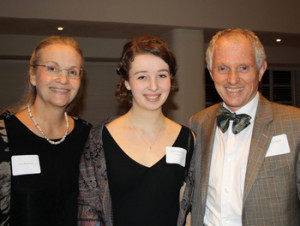 Burckhardt spent the first nine years of her life in Switzerland before living in Ireland, the United States, and finally Canada. With a love for playfully delving into the realm of the imagination, she is majoring in studio art with a minor in English (creative writing); she currently hopes to go on to graduate school in design, where she is thinking of exploring children’s book illustration and writing. As a Quaker, she is at home with silence and inspired by simplicity and service. She loves to cook and bake—her homemade pasta with Gorgonzola sauce is to die for— and she always has time for a cup of tea. She is the co-founder of the Lewis & Clark Tea Society and is an active member of the TCK (Third Culture Kid) Board on campus. She appears at left with Jeanne and Stephan Burckhardt. 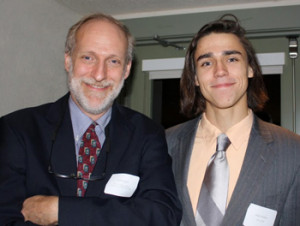 Hurlbut is a history major from Salt Lake City, Utah. Growing up in Utah gave him a lively interest in religion and its ability to motivate and organize. He plans to specialize in medieval European history and to advance our understanding of Christianity’s patriarchal role in the Middle Ages. The relationship between religion and society will always play an important role in our culture, and he would like to further understand how this relationship has evolved. Outside of the classroom, he is an avid cyclist. He appears at left with Paul S. Wright Professor and Director of Strategic Initiatives Robert Kugler. 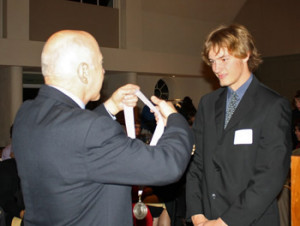 Leinbach hails from the “singing sands of the Sweetwater Seas,” though he finds others tend to just call it the Great Lakes. A childhood spent exploring by bike the environments of Milwaukee, Wisconsin or disappearing into the dune country of his native Northern Michigan sent him down the environmental studies path early in his Lewis & Clark career. He has worked as an investigative journalist and columnist for the Pioneer Log, a resident advisor for the “Pioneers in Environmental Action and Service” themed residence floor, a College Outdoors trip leader, and a chair of the Environmental Affairs Symposium. Still, he is perhaps better known for a penchant for lumberjack folklore, storytelling, and playing the harmonica at odd hours of the night. Leinbach appears at left, during his induction to the Pamplin Society.

Owen, currently studying abroad in East Africa, is a lover of wisdom and a consummate learner. He embraces the liberal arts model by pursuing his diverse interests. In addition to his academic studies, he is an avid sports enthusiast, playing traditional sports like soccer and lacrosse but also ping pong and dodgeball. During his freshman year, he co-hosted a KLC radio show focusing on music from around the world. One of his greatest passions is working with students with developmental disorders. It is this passion that has been the focus of much of his volunteer work. He spent this past summer as an intern, evaluating neuropsychological tests of kids and adults with developmental disorders. 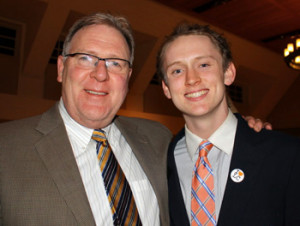 Pirtle is a physics major from Cape Cod, Massachusetts. Interested in learning and experiencing a wide variety of things, he is very active in the Lewis & Clark community. He is deeply involved in the Slam Poetry Club and represented Lewis & Clark in the College Invitational last year in Ann Arbor, Michigan. He has a passion for singing and is part of Cappella Nova, Lewis & Clark’s mixed touring choir, as well as Momo and the Coop, a campus a cappella group. He is a physics lab assistant, and he takes pleasure in teaching and discussing physics with his peers. In his free time, he enjoys backpacking and spending time with friends new and old. He appears at left with Pamplin Professor of Government Curtis Johnson, department chair of political science. 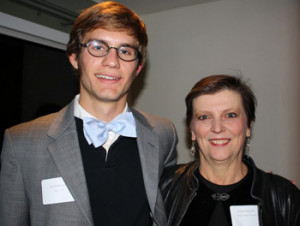 Hailing from Charleston, South Carolina, Salkowski is a music major, with concentrations in both composition and musicology. He is also pursuing a minor in Russian studies. His academic interests center upon the unique place of music in culture, as both a result and potential cause of social changes. He is active in several vocal and instrumental ensembles at Lewis & Clark, as well as the Russian Club, and he hopes to turn these interests into a life of celebrating and cultivating art and culture. He appears at left with Tatiana Osipovich, associate professor of Russian. 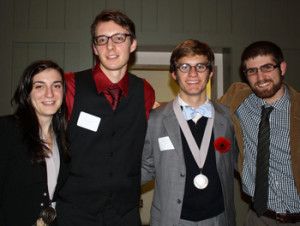 Terpening-Romeo is an English and political science double major. She is the student writer for the Lewis & Clark Chronicle, a writing center consultant, an academic English studies writing tutor, and also works with local high school students on their writing. Before coming to Lewis & Clark, she worked as the managing director of an off-Broadway theater company in New York City, designed and maintained online literature courses for the University of Colorado, and managed a bookstore. Since her arrival in Portland, she has participated in theater productions at the college, worked as a text coach and director with a local Shakespeare company, and directed Lewis & Clark actors in a contemporary play off-campus. She is currently collaborating with Professor Jerry Harp on a book about Shakespeare’s Romeo & Juliet. She plans to pursue her studies of renaissance literature, particularly Shakespeare, through the doctoral level, and eventually teach and direct Shakespeare’s works professionally. In her free time, she climbs, camps, plays music, and climbs some more. Terpening-Romeo appears at left with Pamplin Fellow Warren Kluber ’12, inductee David Salkowski ’14, and Pamplin Fellow Jordan Buysse ’13.

About the Pamplin Society:

Dr. Robert B. Pamplin Jr. formed the Pamplin Society in 1993 to bring together students and professors of the highest caliber in a lifelong association that begins with undergraduate study at Lewis & Clark College. Fellows plan and implement a number of activities each semester in order to enhance the co-curricular educational environment of the College. Programs include distinguished visiting lecturers, service projects, and the annual Teacher of the Year Award. Learn more online.

Photos courtesy of Alison Walcott, director of the Pamplin Society and administrative coordinator for art and East Asian studies.