Fighting Men combines the work of Leon Golub, a painter, Pete Voulkos, a ceramist, and Jack Kirby, a cartoonist. The exhibition probes images of violence and masculinity through these three diverse artists. Kirby, Golub, and Voulkos operated in different spheres of art history and discourse: Kirby innovated superhero comics that brimmed with an excess of balletic violence, Golub’s meditation on images of power and barbarity in modern man kept him in the margins of contemporary art until late in his career, Voulkos transformed the gentile, middlebrow art of pottery into something sweaty, macho and monumental.

Fighting Men—open October 25, 2012 – March 3, 2013—will attempt to work the joints between disciplines. The guest curator for this exhibition is Daniel Duford.

About Fighting Men, an essay by guest curator Daniel Duford

Jack Kirby (1917-1994), Leon Golub (1922-2004), and Peter Voulkos (1924-2000) occupy alternate dimensions. Their achievements are chronicled in different art histories, each with its own priorities. They were all immersed in discredited mediums and subject matter. They don’t fit neatly. At times their work looks conservative and backward; at other times those same qualities seem urgent and prophetic. They rooted around in the mud of history and myth, emerging with their own muscular and ham-fisted approach to their respective materials. 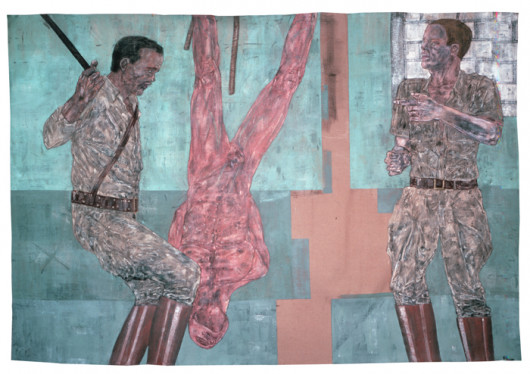 The specter of violence and the consequences of power animate this exhibition. Raw power emanates from the artwork. To watch Peter Voulkos manipulate a huge mound of clay on the wheel and rip and tear at the resulting form is a spectacle of brute force. The sheer strength required of Voulkos to make his work bespeaks extraordinary physical prowess. Power animated Jack Kirby’s superhero comics; his best known and most personal work depicted beings literally crackling with sublime cosmic energy. Leon Golub’s large-scale canvases display a similar material chutzpah as Voulkos’ vessels, but Golub was also preoccupied with power in another sense of the word. For Golub, power and force were the abiding concerns of his paintings—the misuse of political power and the complicity of the citizen and artist in the power of the state. Of course, Kirby’s stories may seem to glorify physical and metaphysical force as a means of keeping order, but his most personal work always contains ambivalence about power.

Through original newsprint comics, large paintings, casts of ceramics, pots, prints, and drawings, the exhibition illuminates the unintended similarities between the artists. Each in their own way, Kirby, Golub, and Voulkos worked in fragments and multiples. The shard and the conflagration are prevailing images running through the works in Fighting Men. The comic panel is a fragment that is glued together to make a story. Kirby stitched together his incomplete epics with fragments of monthly installments. Golub understood that the fragment is the presiding image of modern existence—his paintings derive from the understanding that we receive information through shards of media and bits of conjecture. Voulkos accentuated the shard in his work and revealed the tectonically ruptured nature of the medium. All three artists used collage at some point (the ultimate in modernist shard art): Kirby used it in some of his panels in order to push the characters into a different psychic space; Voulkos and Golub, both owing some debt to Picasso, utilized it as a means to create jarring, disjointed pictures.

The artists in this exhibition scratch and grab at the breaks in between disciplines. Fighting Men is an apt title because, yes, the works do depict fighting, and each artist brawls with his recalcitrant medium. More interesting is that they shove against the cubicles of discourse set up by contemporary art institutions. The once-radical practice of conceptual art has become part and parcel with the art market. Golub continued to make paintings of human figures, openly quoting classical motifs at a moment in history when abstraction was king. Painting itself is constantly being declared dead in favor of more forward-looking, technological practices. Voulkos pushed the provincial craft of pottery into the future by both denying its roots and embracing its long history. Kirby was a futurist all the way, working in a junky medium but always pushing its boundaries.

Fighting Men: Leon Golub, Peter Voulkos, and Jack Kirby opens October 25, 2012 and closes March 3, 2013. The Ronna and Eric Hoffman Gallery is open Tuesday through Sunday, 11 a.m. to 4 p.m. Please note the gallery’s holiday hours. All gallery events are free; parking on campus is free on weekends. For information, call the Hoffman Gallery at 503-768-7687.