A new workshop gives students the opportunity to explore the way innovators and entrepreneurs think.

On the very first day of Lewis & Clark’s new workshop on entrepreneurship, students slipped away from their desks and strolled the grounds to brainstorm business concepts for campus. One of the most popular ideas? A late-night snack cart where students could get coffee or munchies after the library closes at midnight. “It showed us that opportunities are literally all around us,” says Lutfo Dlamini, a senior economics major from Swaziland.

In a later session, students made 90-second sales pitches for quirky-but-authentic products they knew next to nothing about, including a double-spouted water pitcher and a gadget for stirring food as it cooks in a microwave. “At first, the products seemed pretty useless, but depending on how persuasive you were, people either bought the idea or didn’t,” says Annalisa Peterson, a senior biology major from Sandy, Oregon. “We came to understand that how you talk about a product is an important part of making it successful.”

During winter break, Lewis & Clark introduced a “winterim” workshop called Understanding Innovation: Entrepreneurship and the Liberal Arts. The weeklong not-for-credit workshop was designed to introduce students to the entrepreneurial mindset and to the skills needed to put innovative ideas into action in the world beyond campus. Twenty undergraduates, representing a variety of disciplines in the arts and sciences, enrolled and earned certificates of completion. 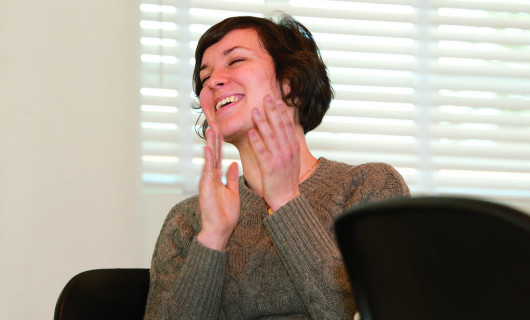 The workshop was designed to support core liberal arts values such as critical thinking, intellectual curiosity, and creativity, while dispensing practical advice for success in the business world. Over the course of the week, teams of students developed their own business ideas, from a roving food truck to a turbine engine for hybrid vehicles to a summer camp. The sessions focused more on practice than theory, and the syllabus was jam-packed; offerings included Understanding the Customer, the Art of the Pitch, and Cocktail Napkin Finance, among others.

At the same time, the workshop aimed to introduce students who have never taken a business course to entrepreneurship in a way that was relevant regardless of their career ambitions.

Participants raved about the workshop. “It embodied what a liberal arts education is all about—living, learning, and exploring,” says Dlamini. “Being entrepreneurial is a way of life, and the sooner students are introduced to that idea, the better.” 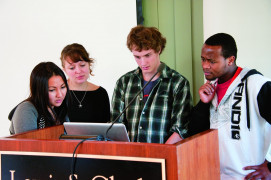 Some students have already caught the entrepreneurial spirit. For example, Rikki Wynn, a senior majoring in theatre and psychology from Washington, wants to start her own food cart and bakery after graduation. She’s had some success selling her own pretzels on campus and compiling a food blog, but she still needs a plan to turn her passion into something real. “I don’t really know what it takes to start a business,” she says, “so this workshop was one gateway for helping me figure out what to do next.”

Participating in the workshop gave Wynn some practical insights on starting a business—how to prepare a business plan, how to attract investors, and so on. But most importantly, it gave her the confidence to realize “I don’t need to be scared about what I want to do.”

A highlight of the workshop for the students was the stellar slate of guest speakers, featuring executives from diverse career backgrounds, from Nike to Mercy Corps, and including several alumni of the college. “The speakers were phenomenal,” says Peterson. “It was inspiring to see what alumni had done with their Lewis & Clark education.”

During one session, Patrick Mahaffy BA ’85, a self-described “serial entrepreneur,” recounted for students how his skills in French (he majored in international affairs and studied abroad in France) landed him a job with a venture capital firm in New York. He later became involved with start-up biotech companies, one of which was eventually sold for nearly $3 billion. Today, Mahaffy is the cofounder and CEO of Clovis Oncology, a Colorado-based biopharmaceutical company that develops anticancer drugs. 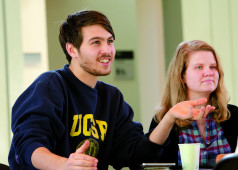 Mahaffy joked that receiving a C minus in college chemistry didn’t stop him from entering the pharmaceutical field. He advised students to follow their passions and not let the fear of failure deter them from taking risks in business or in life.

“The worst decision you can make is to not make a decision,” he told participants during a question-and-answer session. “I’m not afraid of failing. If a decision to turn left doesn’t work out, just turn right and move on.”

The winterim workshop had its genesis in discussions last year between the college administration and the Board of Trustees. A task force made up of faculty, administrators, students, and alumni developed the idea of a not-for-credit workshop in entrepreneurship. The college had not offered a business curriculum since the 1990s, when the business and administrative studies department merged with the economics department.

Tuajuanda Jordan, dean of the College of Arts and Sciences, says the workshop is an experiment that’s designed to be an “extension and an enhancement” of a traditional liberal arts education.

“This workshop is meant to help students develop skills and ways of thinking to apply what they’ve learned at Lewis & Clark to life after college, regardless of whether they will attend graduate school, start a business, or work for a nonprofit. It’s another avenue for preparing our students for success.”