Balancing plates piled high with hors d’oeurves, 30 undergrads mill around the room in Smith Hall as the etiquette expert poses a question: “Who here has ever entered into a new situation and wondered, ‘What am I doing here?’”

Most of the hands in the room go up.

For the next 90 minutes, Mindy Lockard, a professional etiquette consultant, gives students the dos and don’ts for “working the room” at a cocktail party (sustain eye contact, navigate counterclockwise, skip greasy finger foods), then lets them try out their skills mingling with each other and alumni volunteers. Under Lockard’s watchful eye, the students practice skills such as how to enter and exit conversations gracefully and how to shake hands properly: “Stick out your hand, pump a couple of times, then release—no bone crushers.”

There’s more at stake for the students attending the session than just schmoozing—the “mocktail party” was hosted by Lewis & Clark’s Center for Career and Community Engagement (3CE) as a primer for students interested in career networking at social events like actual cocktail parties.

Nao Ohdera, a senior biology major from Japan by way of Connecticut, admits he doesn’t have much experience mingling at parties with prospective employers, but he knows it’s an important skill to have. “You want to make a good impression, and that just makes you more nervous,” he says. At the same time, he recognizes that being able to manage these sorts of situations is key. The 3CE event provides “an opportunity to practice, where you can make a mistake and it’s OK.”

The mocktail party is just one of the ways 3CE helps students prepare for the “real world,” both during and after college. Lewis & Clark students “really want to make a difference in the world,” says Minda Heyman, the center’s director. Yet some might find the word “career” to be intimidating or even off-putting. What makes 3CE distinctive is that it takes an integrated approach to career and community service, offering students a place to get help researching volunteer opportunities or writing a resume.

What makes 3CE distinctive is that it takes an integrated approach to career and community service, offering students a place to get help researching volunteer opportunities or writing a resume.

Heyman tells students that their interests inside and outside the classroom should inform their career choices, sometimes in ways they do not see until they start to connect the dots. As Heyman adds, “Every experience is a stepping-stone and an opportunity.”

Having a clear sense of who you are and what you want to do is critical in this tough job market, especially for newly minted graduates. The national unemployment rate has risen from 4.6 percent to over 8 percent since this year’s graduating class started college, according to the U.S. Bureau of Labor Statistics. The unemployment rate for people with at least a bachelor’s degree has doubled in that span, but is still relatively low at about 4 percent—underscoring the value of a college education.

“You need to be focused,” Heyman says. “And in this economy, you also need to be persistent and resilient to get what you want.”

Whether a student seeks a career in business or in the nonprofit sector, 3CE is there to provide advice on how to get a foot in the door. Last year, 675 students signed up for counseling, and many more participated in at least one of the center’s education programs or events.

3CE was created in 2007 as the result of a merger of what had been separate career and community service offices. Lewis & Clark felt it was important to “integrate both functions,” says Heyman, who has run the center since its creation. “Why have separate offices?”

That philosophy is especially relevant at an institution such as Lewis & Clark, which puts the liberal arts at the core of its mission and encourages students to pursue learning for the sake of learning.

Whether a student seeks a career in business or in the nonprofit sector, 3CE is there to provide advice on how to get a foot in the door.

Many students come to 3CE wondering how their sociology or art history degree is going to help them get a job. The prospect of going out to find meaningful employment—especially if their parents expect them to support themselves after graduating—can be daunting.

“It can be a challenge for our students to translate their work in the classroom to the world outside campus,” says Jane Hunter, associate dean of the College of Arts and Sciences.

3CE helps students understand how the skills they are learning—critical thinking, problem solving, effective writing—are relevant to potential employers, Hunter says. And by incorporating career and community engagement into the equation, students are equipped to put together a more comprehensive picture of what direction they want their lives to take once they graduate.

3CE’s logo—a jigsaw puzzle piece—is a perfect metaphor, Hunter adds. “The student is the jigsaw piece, and they have to find their place in the bigger puzzle.” 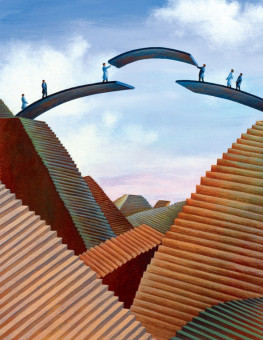 For students committed to public service, 3CE serves as a clearinghouse for opportunities. Lewis & Clark connects students interested in volunteering with three longstanding community partners —Start Making a Reader Today (SMART), a program in which volunteers read one-on-one with young schoolchildren to develop literacy skills; Operation Nightwatch, an organization that runs a downtown hospitality center for the homeless; and Open Meadow, an alternative middle and high school that works with kids at risk of dropping out. The center also supports activities such as alternative breaks, in which students spend their fall or spring vacations volunteering.

In 2009–10, better than 1 of 3 undergraduates at Lewis & Clark participated in some community service project, totaling 40,000 hours of service.

Parasa Chanramy BA ’10 found volunteer work as a high school tutor through 3CE as a first-year student. She returned to 3CE regularly over the years, whenever she was in need of career guidance or was applying for a summer job. The counselors at the center got to know Chanramy’s interests and were able to encourage her to aim high, whether that meant applying for a prestigious fellowship at Princeton or vying for a coveted spot in Teach for America (she was accepted and is currently teaching kindergarten in Minneapolis).

“[3CE counselors] were great at helping me identify my passions and pursue opportunities that would build on my experiences,” says Chanramy. “Their positive energy and support were so helpful—I knew they were rooting for me.”

Senior Isabel Greiner first sought out 3CE’s services as a sophomore to help with summer job resumes that needed to go out in a couple of weeks. “I definitely got to them late in the game,” says the Texas native, but she was able to get the job she wanted.

Describing herself as a “verbose English major,” Greiner says the center’s counselors helped her hone the craft of resume writing, including the finer points of using bullet points. “It was like a code that needed to be cracked,” she says.

The next year, the English and art history double major returned to 3CE with more time. She focused on putting together a stronger resume as well as cover letters for internships at some of the most prestigious art museums in the country. Not only did she score a position at the Massachusetts Museum of Contemporary Art, but she also earned one of the college’s 17 Stephanie Fowler & Irving Levin Summer Internship Awards. She used the award’s $1,500 stipend to cover travel and living expenses.

New this past year, the Fowler-Levin awards help provide invaluable work experience to students who might otherwise be unable to take an internship that pays little or nothing. The awards are funded by Stephanie Fowler M.A. ’97, a member of Lewis & Clark’s Board of Trustees, and Irving Levin, her husband. In addition, a grant from the James F. and Marion L. Miller Foundation will provide funds during the next four years to help students take unpaid internships in areas involving mathematics or the natural sciences.

“There are so many opportunities out there,” says Greiner, who is aiming for a career as a museum curator. “You don’t just have to be a doctor or a lawyer—you can get involved with so many nonprofits, and internships are a great way to get started.”

In a perfect world, students wouldn’t wait until the spring before graduation to access the resources at 3CE, though the center does offer a senior survival seminar to help students craft resumes and cover letters and prepare for job interviews.

The education students get here helps them become critical thinkers and problem solvers. That’s what people are looking for out there—innovators and graduates with an independent, entrepreneurial spirit.Minda Heyman

But earlier is always better. Last year, 3CE was introduced during New Student Orientation. “It is critical to get our message out early,” Heyman says. “Even if students don’t come in until later, at least the seed is planted.”

The sooner students come in, the more quickly Heyman and her staff of counselors can help them put together a comprehensive plan to make the most of their college years and prepare for careers. Developed last year, the 3CE Road Map gets students to document their interests, experiences, and aspirations in a way that helps them align the choices they make during college—the majors they choose, the cocurricular activities they get involved with, the way they spend their summers—with their career goals.

“The 3CE Road Map is a guide providing you with specific strategies and tools to navigate through your four years,” Heyman explains to students. “What do you want to learn? What did you come here to accomplish? What connections do you want to make?”

The bottom line that Heyman returns to again and again with students is that the liberal arts education they have pursued at Lewis & Clark will serve them well, whatever they choose to do with their lives and careers. That solid foundation will give them the skills to adapt to change, especially as the economic landscape is being transformed by globalization and technology. The notion that a college education is intended to prepare students for careers that may not even exist yet couldn’t be more true or more relevant.

“The education students get here helps them become critical thinkers and problem solvers,” Heyman says. “That’s what people are looking for out there—innovators and graduates with an independent, entrepreneurial spirit. The trick sometimes is getting started and figuring out how to articulate who you are and showcase what you have done. And that’s where our office comes in.”

As Wade Higgins, a junior international affairs major from California who was one of the attendees at the 3CE mocktail party, puts it: “Nowadays, its not enough to have a great education. You need to know how to use that education and market yourself, too.”