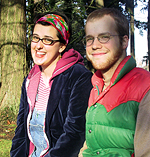 In October, Lewis & Clark College became the first and only campus in the United States to comply with greenhouse gas emissions targets outlined in the Kyoto Protocol.

Designed to address global warming, the Kyoto Protocol challenges the United States to reduce its greenhouse gas emissions to 7 percent below 1990 levels by 2012. The treaty was signed in December 1997 but was not ratified under the Bush administration.

The College’s Kyoto compliance was accomplished through a three-year campaign by members of Students Engaged in Eco-Defense (SEED), the environmental club at Lewis & Clark. Also, without the widespread support shown by the student body, this achievement would not have been possible. We have reached this goal through emissions reductions on campus and the purchase of carbon dioxide offsets.

Purchasing offsets means we are investing in projects that reduce greenhouse gas emissions. Offset projects might include developing energy-efficient buildings, factories, and transportation options; using renewable energy, such as wind, solar, and tidal; and capturing carbon dioxide in forests and agricultural soils. They are called “offsets” because the reductions in greenhouse gas emissions do not occur at the College; rather, they are implemented at other sites by a separate organization—in our case, the Climate Trust, a Portland-based nonprofit.

Reaching Kyoto compliance demonstrates that Lewis & Clark students are concerned about the threats that global warming poses. They are willing to take action now to prevent catastrophic problems in the future. Also, we have proven to naysayers that purchasing offsets is affordable; in our case, the initiative cost about $10 per student.

Generally speaking, Lewis & Clark is an environmentally aware campus. Many students, faculty, and staff understand the significance of what we have done and are doing. Since the 1990s, the College has taken several actions to reduce emissions, including upgrading natural gas boilers, purchasing energy-efficient appliances, adopting LEED “green”-building standards, and improving transit options. Also, Lewis & Clark students now have the option to purchase green power for their residence hall rooms—another first for the College and for the nation.

Every individual can take easy and affordable steps to reduce his or her greenhouse gas emissions. Reducing commuting drastically cuts emissions, but when driving is a necessity, buying a more efficient car is a great idea. By simply increasing the gas mileage of your car by 10 miles per gallon, you will be nearly Kyoto-compliant. You can also focus on energy use. By purchasing energy-efficient appliances you can save money on electrical, water, and heating bills, as well as reduce emissions. Another great idea is to replace incandescent light bulbs with compact fluorescent (CF) bulbs. One CF bulb can last as long as nine regular bulbs and uses 75 percent less energy.

In addition, purchasing green power is now an option through many power companies. If that option is unavailable, however, you can purchase green tags, or investments in alternative energy sources, from organizations such as the Bonneville Environmental Foundation. Green energy is an excellent way to reduce personal emissions while helping the developing alternative-energy market. Last, you can calculate your personal emissions with www.carboncounter.org and then become climate-neutral through the purchase of offsets.

National efforts to reduce emissions are essentially nonexistent. As a result, students and others are taking action in hopes of initiating a shift toward greener energy, lower energy consumption, and declining emissions. If individuals make changes in their habits, perhaps national governments will follow.