As candidates for the nation’s highest office prepare for their final debate, Lewis & Clark’s President Barry Glassner and undergraduate student body president Xander Blair will host an event to cap off a busy election season. 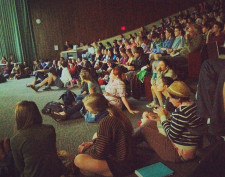 On Monday, October 22, students will once again pack Council Chamber as Glassner and Blair host the final event in a very popular series of presidential and vice presidential viewing parties.

“Many students here at Lewis & Clark are frustrated with the current state of American politics and are basing their candidate choice by looking down the road,” said Lincoln Boyd ’15, head of the College Republicans.

A student organization, Election Watch, created a blog as a platform for student discussion about the presidential candidates and important issues such as the economy. Students post anonymously, offering honest reflections about topics ranging from campaign contributions to dissatisfaction with the major political parties.

Voter registration has been another major initiative this fall.

“There is plenty of evidence of how active students here are,” said Will Aime ’15, one of the leaders of Students for Obama. “Just from doing voter registration around campus, there were plenty of people who had already registered, or were planning on voting in their home state and had filled out an absentee ballot. There are also plenty of other groups trying to raise awareness for their issue.”

A robust website provides nonpartisan voter and civic engagement resources for all Lewis & Clark students to prepare for and participate in the upcoming election.

Blue Lassiter ’15 contributed to this story.