Lewis & Clark has a strong tradition of preparing students for careers that serve others and engage with the world. Brandis Piper, who earned a BA in history last spring, is happy to be part of it.

“I’ve wanted to be a teacher since my sophomore year of high school,” he says. “I’ve been in that mindset, trying to take opportunities that prepare me for it, since then.” 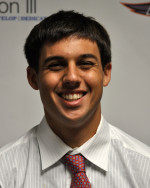 In his quest, Brandis made full use of the abundant activities and experiences available to our students. A starter on the football team, he played in all 36 games of his four years as a wide receiver. He was also cochair of the Student-Athlete Advisory Committee, a student government representative, an Oregon Special Olympics volunteer, a tutor at a local high school, an admissions blogger, a reunion assistant, a Woodrow Wilson fellowship finalist, and an intern in athletic administration. For his exceptional contributions to the campus community, Brandis was honored by the Pioneer Athletics Club.

“All the things I’ve been involved in give me perspective,” he says. “All of those things have helped create my outlook and shape who I am right now.”

Brandis is also one of more than a dozen 2012 graduates who decided to enroll in the Master of Arts in Teaching Program at Lewis & Clark. A growing number of alumni are pursuing their secondary degrees here.

Brandis is excited to begin a career as a high school social studies teacher—and, he hopes, as a football coach—after he completes his master’s program this summer. The same spirit that guided him and his teammates to victory on the football field animates his approach to his chosen career.

“By the end of the season, everybody on the team knew we could win and trusted the guy next to him,” he says. Now, he believes his future students have the same prospects for success: “Everyone can win.”