What does the Teacher of the Year honor mean to you?

It means that the people whose opinion I value most (students) think I succeed sometimes in what matters most: making sure that they learn. Teaching is not magic—you have to experiment, and you fail a lot. What amazes me about Lewis & Clark students is how trusting, patient, and forgiving they are. They understand how much their education means to us, and they allow us to go down blind alleys and try novel approaches because they trust that we have their learning as our highest priority.

What classes do you teach during the year?

It differs from year to year. The philosophy department is very committed to premajor education, so all of us enjoy teaching 100- and 200-level courses such as Introduction to Philosophy and Ethics. We also contribute to the first-year core course, Exploration and Discovery. When a department commits to premajor education the way ours does, you get the chance to develop student mentor relationships right from the start. 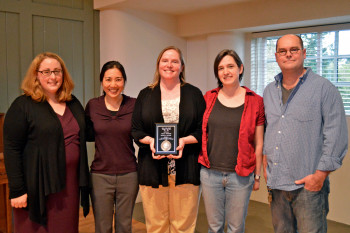 Because we’re a small department, we teach our specialized courses only every other year. I teach our course in Early Modern Philosophy, which covers the 17th and 18th centuries. I also teach our courses in the Philosophy of Mind and Philosophy of Language. My own research is focused on these areas, so these courses are an exciting opportunity to do student research.

I’m especially eager about a 400-level course I’ll be teaching in the fall on imagination. Imagination is at the root of our most fundamental mental capacities: reason, action, and emotion. Our imaginative abilities allow us to envision possible outcomes, anticipate consequences, and place ourselves in perspectives other than our own. And I’ve never really studied it. We’ll work through the current research in philosophy and psychology on imagination and students will work on original research projects.

What is your the focus of your personal research?

Well, I’m a bit of an odd duck. Most philosophers focus on a single figure, time period, or area of philosophy, like ethics. While most of my publications have focused on the 18th-century philosopher Thomas Reid, I chose to work on him because he’s interested in the wide range of philosophical issues I find most interesting: the intersections between perception, language, scientific method, morals, and aesthetics. It turns out that Lewis & Clark is the perfect place to be for a researcher like me because my colleagues are similarly enthused about taking the broad view of philosophy. We take our philosophy where we find it. That’s pretty rare these days, and I feel very lucky to be with colleagues who approach philosophy with such honest curiosity.

Please share an example or two of how students surprise and astonish you.

You’d have to be there. That sounds flip, but I mean it. I have two prints of famous paintings in my office that I use to illustrate what philosophy is about. The first is of an old guy with a white beard reading a book—it’s Rembrandt’s Philosopher Reading. That’s what most people picture when they think of philosophy. The second is a cacophonous group of people assembled in large space immersed in conversation. That’s what philosophy is. It’s Raphael’s School of Athens. Philosophy is a many thousands year old conversation among the living and the dead, about the most important things.

So, philosophy is dialogue, it’s conversation, it’s an ineliminably social, human, practice. I learn something every time I do philosophy—and most people I do philosophy with are my students! I learn from them constantly.

The trick is to get beginning students into the conversation quickly. It’s pretty funny—imagine you have taught someone to ride a bike, and she makes great progress, and you are riding together through, say, Forest Park, and the person turns to you and says, “This is great. But when do we get to ride bikes?” Teaching philosophy is like that. Students always want to know when they get to do philosophy. By the time they get impatient and impertinent enough to ask you that question, they’ve been doing it for quite some time.

Can you say a little more about how and why “teaching didn’t come naturally” to you?

Well, since I said it, I should be honest about it. I wasn’t very good at it. When I went to graduate school, no one mentored us about teaching. You were just thrown into a classroom and told to do it. I hated it. I’m a perfectionist and it became clear that I could never be perfect, or even good, at teaching. There would always be one or two (or twenty) students I just couldn’t reach. I felt like the proverbial catcher in the rye—losing kids over the cliff in droves. And of course that made me resentful and insecure—the worst possible combination of emotions to bring to the classroom.

What changed? In my last years at Cornell, I had the opportunity to teach in the university’s first-year core course—a course like our Exploration and Discovery. Instructors for that course took a class designed to teach you how to teach. I realized I was a lousy teacher because I hadn’t approached teaching the same way I approach everything else. I hadn’t approached it as something I could learn from others and get better at.

I got very lucky when I arrived at Lewis & Clark because I had so many people who could help me become a better teacher. Nick Smith was my main mentor, and he is an extraordinary teacher (not to mention a brilliant philosopher). He taught me to be confident but open, and to use my personality in the classroom rather than sublimate it. I also learned a lot from colleagues who arrived at the college at the same time as I did. I learned from Jerusha Detweiler-Bedell how to focus on students rather than myself. That simple but powerful lesson changed everything about how I teach. I learned from Paul Powers to create assignments that would bring out the different strengths of different students rather than to just assign the sorts of things I had been most comfortable with as a student. So, though I am the only kind of teacher I can be, the teacher that I am is really due to what my colleagues taught me.

How, if at all, are students today different from students when you arrived here in 2001? How are you different?

I saw some graffiti in the bathroom some years ago. It said: “Fly, follow your dreams, gravity will hold you down,” and my first thought was, yeah, so will poverty. I don’t see much of that sentiment these days. Lewis & Clark students are more focused and driven. They realize there is no such thing as majoring in “changing the world.”

While I lament the economic conditions that play a role in our students’ realism about their futures, I don’t lament their ambition in the least. I have tremendous confidence in this generation and an optimism I haven’t felt in quite some time.

I am very different. I had a difficult graduate school experience and when I arrived at Lewis & Clark, my confidence was shot. But thankfully my colleagues saw something in me. Nick Smith, Curtis Johnson, and Rob Kugler all mentored me with herculean patience. They knew I would never be happy here as anything other than a philosopher—as someone whose identity is grounded in her scholarly contributions to the field. They also knew I couldn’t be happy unless I could help shape Lewis & Clark through service and teaching.

I’m very happy now. I get to do the research I love with colleagues like Jay Odenbaugh, who inspires me daily to push against the rigid habits of my mind. I get to teach students whose brilliance is matched only by their ambition to make the world more just and peaceful. And I get to shape the vision of the college thanks to Dean Jordan, who trusts me to contribute something more than good intentions and what I think are the right beliefs.

I want to thank all my students. You would think that year after year, at some point their effect on your life would be blunted, but it’s just not so. My students are relentlessly powerful in their ability, as I said, to surprise and astonish me. One of my favorite poets, Stephen Dunn, puts this point better than I could in his poem “Sweetness,”—“Often a sweetness comes / as if on loan, stays just long enough / to make sense of what it means to be alive, / then returns to its dark source. / As for me, I don’t care / where it’s been, or what bitter road / it’s traveled / to come so far, to taste so good.”