You Do The Math

Lewis & Clark prepares teachers to implement new Common Core State Standards in K-12 mathematics. Putting those standards into practice may be one of the most challenging—and important—problems math teachers need to solve. 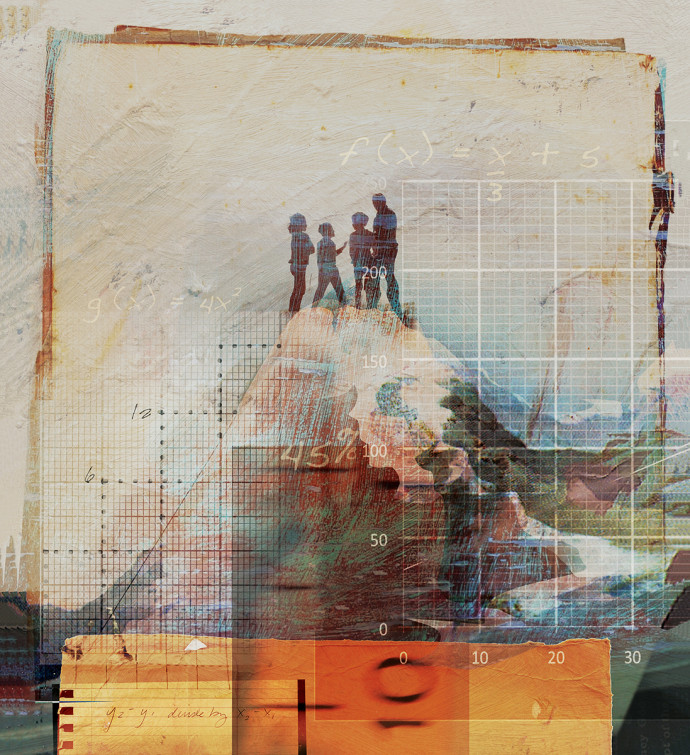 If you want to find the slope of a line, Kayla Stolte M.A.T. ’11 knows that all you need to do is plug four numbers into a simple formula. “When I was in high school, my teacher told me that to find the slope, you take y2 – y1 and divide that by x2 – x1,” she recalls. “I had a good memory, I did it 30 times, and I memorized it.”

Today, as an algebra teacher at Portland’s Benson Polytechnic High School, she teaches lessons to her students that are miles from the memorize-and-regurgitate process she learned years ago. In her own recent lesson to teach slope, for example, she explained to students they were going on a hike up a mountain. In her example, the students took 9 steps and rose 27 feet (a steep mountain, indeed). Students quickly intuited that they rose three feet per step, and plotted that information on a graph. If the mountain went up in a straight line, like a ramp, where would students be after six steps? What about 12? Students dutifully plotted these numbers on their graphs, but soon got bored. It was easy, too easy. And then she threw them for a loop: What about 4,377 feet? How many steps was that? “They were like, ‘Oh, do we have to graph that?’ And I said, ‘I don’t know. You need to know how much the line goes up, how much it goes over,’” she says.

They looked at their graphs again to see if they could suss out an answer. Suddenly a student shot his hand into the air. “I figured out a shortcut!” he announced proudly. He saw the pattern, and he had derived, on his own, the formula for the slope of a line. “He was so excited, and then he asked me, ‘Did you know that [shortcut]?’” Stolte recalls with a laugh. “And I said, ‘Oh, I’ve heard of it before.’”

The student’s experience was, in a nutshell, the very best of what Common Core teaching can do. It’s an approach that doesn’t just require students to learn specific topics and concepts; it puts real problems first, then widens the lens to help students see how those specific problems rest on larger principles. It helps students understand that, with the right guidance, they can deeply understand mathematical ideas in a way that simple memorization can’t match.

As the Common Core standards roll out in 45 states across the country, including Oregon, they are changing the way students learn and teachers teach. Lewis & Clark’s Graduate School of Education and Counseling sees its role as helping teachers bring a thoughtful mindset to teaching math in the 21st century.

The Heart of Common Core Teaching

Considered as a whole, mathematics teaching in the United States has long been a messy business. Until this most recent change, there have been few attempts to ensure broad consistency across states: a concept that a Massachusetts student learns in elementary school might not be taught in Mississippi until late middle school, for example. A mile-wide, inch-deep approach has made it difficult to inspire student passion. And perhaps most problematic, the larger goal of fostering mathematical thinking—not viewing math as an endless series of formulas to learn and apply, but as a way of thinking, with an array of tools to solve problems—too often got sidestepped in favor of rote memorization.

“Ten or twenty years from now, our kids are going to use math in jobs that we can’t imagine. We haven’t been able to afford mathematical illiteracy for a long time, but we really can’t afford it now.” Kasi Allen, Associate Professor of Teacher Education

According to Kasi Allen, associate professor of teacher education, these problems have real consequences. We’re living in a time when it has become socially acceptable to say you’re “not a math person,” she says, yet the country needs people who understand and love math to be innovators for the next century. Indeed, a 2012 Organization for Economic Cooperation and Development assessment found that among 65 countries assessed in math, the United States ranked 31st. “Ten or twenty years from now, our kids are going to use math in jobs that we can’t imagine,” Allen says. “We haven’t been able to afford [such mathematical illiteracy] for a long time, but we really can’t afford it now.”

The Common Core, with a list of required standards by grade level, aims to change that. Topics range from ratios to vectors to conditional probability. But perhaps even more important than the standards themselves, the Common Core approach emphasizes teaching in ways that start with real-world problems—the things that students can already understand—and then connects them back to abstract principles.

The Common Core represents a profound change in teaching and learning mathematics, and since 2010, Lewis & Clark has made sure the students going through its teacher preparation program are ready for this shift. Students create work samples, develop units of instruction, and even conduct research studies on how kids learn, all based on the foundation of Common Core teaching. And while many colleges and universities are still playing catch-up when it comes to Common Core, students graduating from Lewis & Clark hit the ground running.

The Power of Discovery and Internalizing Lessons

When Leslie Phillips M.A.T. ’11, a teacher at Portland’s Madison High School, teaches her students how to find the area of a trapezoid or a kite, she doesn’t draw shapes on a board; instead, she gives her students paper shapes that they can manipulate with their hands and cut with scissors. They already know a bit about finding the area of a shape, so she asks groups to work together to see if they can apply what they’ve already learned to shapes they haven’t yet studied. Students cut apart shapes and put them back together like puzzle pieces, finding patterns and order they may not have otherwise discovered.

She asks all the groups to present their findings on their specific shape—and she stays out of the way. “I never teach the rest of the class to find the area of these [shapes]; the students take notes as other kids present,” she explains. “Groups become authorities on their topic, and students can ask [these expert students] if they need to have it explained to them again.”

Such moments can be powerful reminders to students that math formulas don’t drop from the heavens on stone tablets. Students can discover formulas and solutions on their own.

This is a critical lesson for math teachers in particular to understand, says Allen. Because so many prospective math teachers were willing to accept abstract ideas and simply memorize formulas as young people, they need to see it with fresh eyes to understand how many students grapple with the subject.

For example, Allen says, her M.A.T. students understand that to divide fractions, they can just invert them and multiply. They both know and believe the rule. But she argues that this is not compelling evidence for the young students they will teach. They want to know why it works. “It’s not intuitive; it feels like magic,” Allen explains. “That’s why we work on developing pedagogical content knowledge. Students come here and relearn math for the purposes of teaching.” They dig deep to understand what’s going on beneath the surface of those clean formulas, so they can support and build from the ideas of their students rather than simply telling their students what to think.

To help make sure students are deeply understanding the lessons they teach and aren’t just applying formulas, Lewis & Clark alumni are finding methods to assess their students that are just as thoughtful as the lessons themselves. “Show that you understand your work” has become the new “Show your work.”

Stolte, for example, says the tests she gives come in two parts: a traditional-looking math test that anyone would recognize, plus a second, separately graded section that is a brand-new type of problem that can be solved only if students can synthesize the lessons they’ve already learned in new ways. “I want to see if they can follow the thought process they learned when they learned slope, but extend it, find a new shortcut, or think of a different way of doing things,” she says. “I really want them to persevere in solving these problems.”

The Challenges That Remain and the Promise Ahead

To help her students think creatively about math problems, Kasi Allen, associate professor of teacher education, posts a “Problem of the Week” outside of her classroom. The mind benders have become massively popular—and not just among students in her classes. It’s just one more data point that shows math, done right, can be compelling to just about anyone.

Two rats, one male and one female, decide to make their home in an abandoned barn on Christmas Eve with plenty of access to food and water. Given the four assumptions below, how many rats would you expect to be in their “family” at the end of one year?

Adapted from the Interactive Mathematics Program

To be sure, the path of Common Core teaching has plenty of obstacles. A lack of field testing before the standards were implemented means that huge swaths of students will essentially serve as guinea pigs for a vastly different approach to teaching and learning. And—perhaps unsurprisingly, given that fact—early Common Core–themed exams have proved disappointing, with significantly lower pass rates than previous testing. (In New York, for example, pass rates plummeted 30 percent compared to previous testing.) However, because implementing Common Core standards is tied to federal funding, no one expects it to go away anytime soon.

Adam Taylor M.A.T. ’14 worries that the program’s first cohort of students will be at a distinct disadvantage. “For students who have been doing Common Core standards for their entire career, I think the [progression] makes sense, but for current students, it’s going to be difficult to get where they need to be. Is it outside of what they’re capable of? Maybe not, but it’s going to be hard to get students to grasp these concepts,” he says.

The fact is that no matter how good a lesson, students learn at different paces. Eventually, teachers need to share the formula, and at that point, says Phillips, many students get ruthlessly pragmatic. Once they learn a shortcut, they’re less curious about the path that can get them to that formula. Even those who discover concepts through their own work constantly need these ideas reinforced, Phillips says.

And recent Lewis & Clark graduates aside, current teachers face a steep learning curve as they move to new standards and a new type of teaching. With educational budgets still tight, the kind of comprehensive training that is required to help shift in this direction is significant.

But regardless of these challenges, Allen believes that over time the Common Core principles and standards have incredible potential to improve the teaching and learning of mathematics in the United States—so that all students experience math as something they can do. The right standards and the right approach can make all the difference.

For in the end, the real goal is not for students to know the slope of a particular line or the area of a parallelogram. It’s to be ready for the work that awaits them in college and beyond. “The real value is learning mathematical thinking,” Allen says. “The answers to the world’s biggest problems won’t be found in the back of the book.”

Erin Peterson is a Minneapolis-based freelance writer who writes for more than a dozen colleges and universities. She knows the value of pi to 10 places. 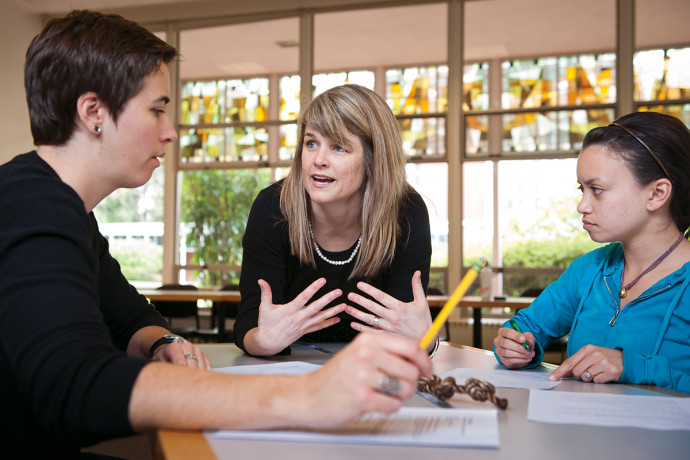 You Do The Math