Empowering Women Through Self-Defense and Dance

In Varanasi, India, a sacred city on the banks of the Ganges, women struggle daily with issues of street harassment, abuse, and rape; yet discussion of these problems is seen as taboo. “Women can’t even talk to their mothers and sisters about these issues,” says Hillary Patin CAS ’14.

Empowering Women Through Self-Defense and Dance 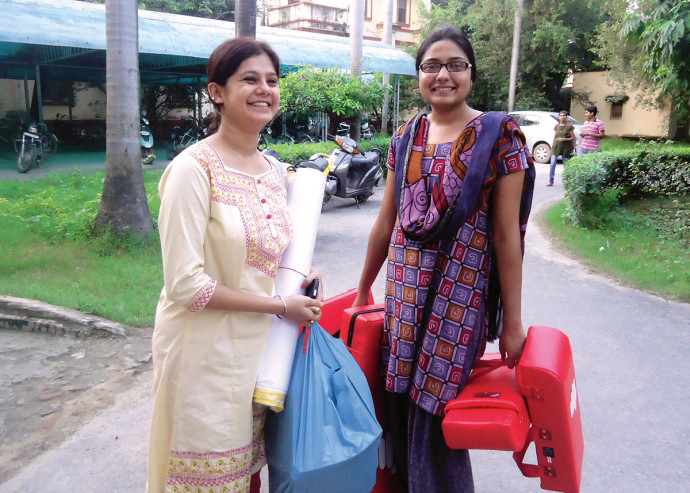 While participating in the college’s overseas study program in India in 2011, Patin and fellow student Miranda Benson (who graduated last year) were inspired to develop a project to empower women and give them the tools to defend themselves against street harassment and rape, two of the biggest issues for women in India at this time. Drawing on their many years of dance experience—as well as training they received in self-defense from the Portland Police Bureau—Patin and Benson partnered with Banaras Hindu University and Nirman inner-city school (K-12) to teach women of all ages self-defense and dance.

Developing confidence unites these seemingly dissimilar activities. Patin and Benson began by teaching children and young women dance. Once their confidence and sense of self-worth were high, Patin and Benson introduced self-defense techniques. They also encouraged participants to break the communication barrier and, at least in class, discuss their fears and experiences around harassment.

“By the last class, I was extremely proud of the women because they were all so supportive of each other and had gained so much confidence,” says Patin. “Women everywhere are dealing with the same problems.”

The project won a $10,000 grant from 100 Projects for Peace, an initiative funded by philanthropist Kathryn Wasserman Davis. The program encourages undergraduates to design grassroots projects to be undertaken around the world with the help of $10,000 grants. Lewis & Clark students have earned the coveted grants each year since the program’s inception. To make this project a reality, the president’s office at Lewis & Clark and the Creative Dance Center in Seattle contributed additional funding.