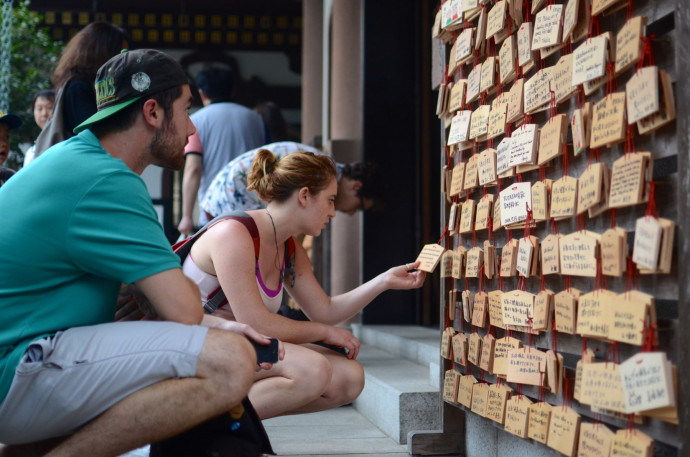 For over 50 years, Lewis & Clark has been committed to international study. Overseas and Off-Campus Programs is one of our most distinguishing features, attracting students from—and sending students to—every corner of the globe. More than 60 percent of our undergraduate body chooses to study abroad, often in countries outside of Western Europe.

This summer, Associate Professor of History Andrew Bernstein and Associate Professor of Geological Science Elizabeth Safran led a special program to Japan to study Mount Fuji. Thirteen students spent seven weeks learning how the iconic mountain is an actor in, and a product of, both the physical world and the human imagination. The trip brought together students from different backgrounds and majors—economics, history, biochemistry and molecular biology, East Asian studies, and environmental studies—in a unique, interdisciplinary study abroad experience.

“Fuji was a great place to do an interdisciplinary program,” Safran says about the trip, which was a joint collaboration between the Environmental Studies Program and Overseas and Off-Campus Programs. “You can’t talk about it without delving deeply into religious history, or talking about art. And yet it’s got these amazing geological features that fundamentally shape the landscape. Everything is woven together—how water travels through the mountain and where it emerges; what kinds of eruptions the mountain has, and how they shape the places where people live, and work, and worship, and try to grow things.”

A highlight of the program was a comparative study of three young lava flows on the north side of Mount Fuji and the areas adjacent to them. All three lava flows—Kenmarubi, Takamarubi, and Aokigahara—are relatively young, effusive basaltic flows. The best dated and most voluminous is the Aokigahara flow, which erupted in 864-866 AD from a parasitic cone on the northwest flank of the volcano. Each research site was picked because it represented an intriguing change of land use. Two groups examined the biological and geological characteristics of each site, while the history group looked for significant changes due to human intervention.

Students in each group worked together to formulate their own research questions, hypotheses, and data collection plans with the help of innovative digital tools, including iPad minis, and under the guidance of a Japanese ecologist from the region. The iPads were preloaded with georeferenced maps of the Fuji region, including ones created by student researchers in the ENVS department that showed land cover change around Fuji over time.

“It’s one thing to learn in a classroom about the interconnectedness of geology, politics, agriculture, and various other phenomena,” Bernstein says. “It’s another to experience it first hand.”

Bernstein has been working on a book about Fuji for the past eight years, and the connections he established during previous trips to Japan led to meetings with people ranging from the vice minister of the Ministry of the Environment to the manager of a saké brewery. Bernstein and Safran went on a Mellon Grant-funded reconnaissance trip to study Fuji a few years ago and came back confident that they could co-lead a program in Japan.

Students also learned about Fuji’s extensive cultural reach. One assignment sent them around Tokyo to find images of Fuji scattered throughout the city. Toward the end of the trip, the class summited the volcano, which is taller than Oregon’s Mount Hood.

“As someone who had never before traveled abroad, Japan was an eye-opening experience,” Oscar Cojocariu ’17 said. “Besides staying in urban hubs like Tokyo and Kyoto, we got a chance to live in and experience smaller cities like Fujinomiya and even the countryside. Because of how much we moved around, we were exposed to a Japanese diversity that reached “melting-pot proportions”—the variety of subcultures, aesthetics, infrastructure, and culinary dishes seemed infinite and is something I’ll never forget.”