In December, Jay Locey was named the 10th head coach in Lewis & Clark football history. He most recently served as the chief of staff for Oregon State University’s football program in Corvallis. Prior to joining OSU, Locey spent 10 seasons as the head coach of the Linfield Wildcats, a team he led to the 2004 NCAA Division III National Championship. He ended his career at Linfield with an 84-18 overall record, guiding the Wildcats to 41 consecutive wins and six Division III play-offs.

Why return to the Northwest Conference and NCAA Division III?

The most enticing thing was the opportunity to be coaching again in a head-coach role. I learned a lot of great things while at Oregon State as an assistant coach and as the chief of staff, but I am looking forward to being a head coach again.

What are some of Lewis & Clark’s strengths?

There is strong administrative support—Lewis & Clark wants to invest in this program and make it successful, and that excites me. In terms of recruiting, the academic component speaks for itself. Anyone that comes here is privileged to leave with a great education. The Portland location is outstanding, and the campus and football stadium are absolutely incredible.

What are your goals for the program?

I’m not going to throw out a win or loss record, but we are going to redefine what it means to win. Early on, it’s about building a culture as much as anything. I think the good coaches—whether it’s John Wooden, Pete Carroll, or Nick Saban—define winning as having the peace of mind of being the best you can possibly be. That means making the most of every day, every drill. In every aspect of your life, be your best. We want our guys to have a commitment to excellence and to leave a mark of class every day—whether it’s in the dorms, in the classroom, in the weight room, or on the football field. When you have a commitment to excellence, everything else takes care of itself, especially the winning. 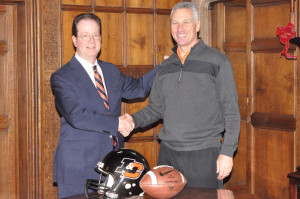 The beautiful thing about athletics is it provides the opportunity to learn the intangibles of success. If you think of athletics as a classroom, it actually provides some of the most common traits of success: hard work, teamwork, overcoming obstacles, picking yourself up off the floor, and conflict management. In athletics, you compete in front of people and you learn how to handle yourself because of it. So I think it creates a great opportunity for people to grow in grit, which is often the No. 1 ingredient of success.

In your view, what is the most important take-away for Pioneer football players?

Someone once asked Amos Alonzo Stagg, a pioneering American football coach, “How good is your football team going to be?” His answer was perfect: “I won’t know that for another 20 years.” What we’re trying to do, that gives us great satisfaction as coaches, is teach these student-athletes principles and concepts that they can apply on and off the field. We want them to have experiences in football that can make them successful in life—as a family member, as an employee or employer, and as a community member.