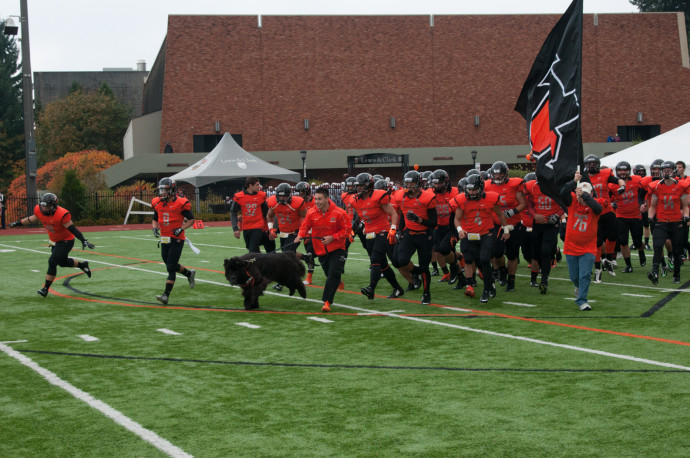 Since Lewis & Clark moved to Palatine Hill in 1942, the college has marked homecoming in a variety of different ways—including receptions, classes, concerts, parties, runs, dances, parades, and float competitions. But one event, an alumni favorite, has remained constant: the homecoming football game. Each year, on Saturday afternoon, the Lewis & Clark community joins together to cheer on the Pioneers.

This year’s October 17 homecoming game against Pacific University has special meaning; it is the middle contest of five at home for the Pioneers during the team’s 70th season on Palatine Hill. Further, it will provide returning alumni an opportunity to participate in the start of a new era of Lewis & Clark football under first-year head coach Jay Locey.

This year, more than 800 former Lewis & Clark football players are being invited back to campus to take part in an all-class football reunion. A number of fun events are being planned, including a pregame brunch in Pamplin Sports Center with historical football photos and memorabilia on display.

Coach Locey knows homecoming is always a special time on campus since he’s been around the college game for 32 years. While he emphasizes the need for coaches and players to keep their focus on the game, he also sees the weekend activities as a plus for the team. “It’s a great time for our guys to connect with the school’s football history, especially since so many former players will be there cheering them on,” Locey says.

Talk of homecomings past gives rise to fun memories for alumni, especially those who were around in the early years before the Pioneers had a football stadium of their own on campus.

In the 1940s and early 1950s, before Griswold Stadium came into being, Lewis & Clark teams played their home games in a variety of stadiums around town, including what was then Multnomah Stadium but is now Providence Park. Students and alumni took advantage of the downtown Portland location to produce homecomings that may seem hard to imagine today.

On Saturday morning before the game, cheering students would parade up Broadway on floats created by various campus organizations; some students would walk the entire parade route, and others would ride in student-owned and borrowed convertibles. Delta Tau Rho fraternity’s black and orange 1927 Model T (of swimming pool fame) was usually in the lead. The parade would then head west to the stadium, where the floats would circle the football field.

Pregame luncheons for alumni, sponsored by Lewis & Clark’s various student organizations, were held in downtown restaurants. Always a big draw for students and alumni after the game was the annual homecoming dance on the plywood floor of the old gym back on campus. Orange chrysanthemum corsages with black and orange ribbons were in abundance.

A variety of new homecoming events are being added every year by the Office of Alumni and Parent Programs. But all activity still is scheduled around the main event: the football game Saturday afternoon.