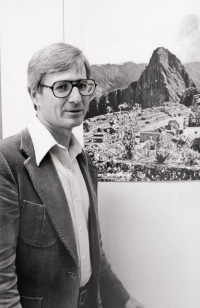 Vance Savage, 1981When I received the fall issue of the Chronicle, I was saddened to read about Professor Vance Savage’s passing. “Vance,” as we were allowed to call him, had a huge impact on my life as a Lewis & Clark student from 1978 to 1982.

I began my college career as a theatre major. My second love had always been Spanish, and I was placed in second-year Spanish with Vance. Apart from being an excellent professor and having a true talent for speaking Spanish, Vance was a professor who was approachable—he always made his students feel at ease.

The theatre department in 1978 was very experimental and conceptual, but I preferred traditional theatre. Thankfully, I was able to change advisors to Vance, who very slowly and subtly influenced my decision to change my major from theatre to foreign languages and culture.

In my sophomore and junior years, I was able to participate in two overseas study programs with Vance (and his wife, Jill) to Mexico and Costa Rica. Vance was an excellent person to have heading up those trips as he was well organized and was able to create a family-style overseas group. Both trips proved to be lovely experiences.

Between Spanish classes and overseas trips, Vance was always available for his students. If he had some spare time, he would go down to the campus café and have a cup of coffee with me and talk about Latin American issues. It was so special to have a relationship with a professor outside of the classroom. I also think that my relationship with Vance is why I eventually went into teaching. I presently teach high school students English at a classics high school near Florence, Italy.

I was able to see Vance on and off after I graduated and am extremely grateful for his friendship. Thanks to Vance, I was able to get the direction I needed for my major in Spanish as well as a greater understanding of Central America and its people.

Well done, Vance! I will never forget what you have given me in my education as well as life. Thank you!

I am always interested to read about the campus and students at L&C. It seems amazing what has taken place since I was a student.

I am especially delighted to read about students volunteering in the community. This was an important part of my experience—way back then!