Going Organic Before It Was Cool

Harry MacCormack remembers growing up in a small farming community in Chenango Bridge, New York, where fuel rationing, victory gardens, iceboxes, and a volunteer fire department were the norm during the 1940s.

He gardened with his mother and spent time fishing and hunting with his father. At 5 years old, he sold his first vegetables door-to-door in his little red wagon.

“The way I look at the world comes from my parents and growing up in a morally based community where people took care of each other,” he says.

MacCormack’s life changed significantly in the mid-1950s. His dad, a developmental engineer for IBM, was chosen to site the company’s expansion in San Jose. During that first summer in California, he took a job picking beans with Mexican laborers. “I was shocked when a crop-dusting plane dropped pesticides all over us and the beans,” he says.

He also witnessed the birth of what is now Silicon Valley, an event in which hordes of high-tech workers displaced family farmers in the nation’s fruit basket. Those events set the stage for MacCormack to later launch Oregon’s organic farming movement.

But first, he honed his leadership skills. In high school, he was elected moderator of the San Jose Youth Presbytery. When it came time to choose a college, he selected Lewis & Clark because of its Presbyterian roots.

“At one time, I thought I wanted to be a minister,” he says. “But during the political climate of the 1960s, I chose activism instead.” He joined the civil rights and antiwar movements, earning the name “Crusader Rabbit” on campus.

Going Organic Before It Was Cool 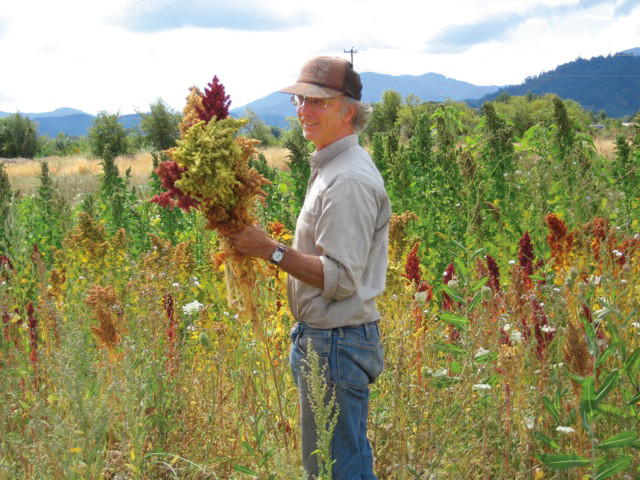 MacCormack’s literary talent blossomed at Lewis & Clark. He majored in English and philosophy under the guidance of two distinguished mentors: poet, educator, and pacifist William Stafford and esteemed philosopher and professor Rena Ratte. “He called me a philosophic poet,” he says. “She saw me as a poetic philosopher.”

After Lewis & Clark, MacCormack studied at Harvard University and the University of Iowa Writers’ Workshop. After earning an MFA in poetry, he headed to Oregon State University in Corvallis, where he taught three decades in the English and theatre departments.

However, a subtle shift in priorities took place when he began farming in the early 1970s, first on rented property and then as the owner of Sunbow Farm near Corvallis. He recognized the local demand for fresh organic produce and cofounded the Corvallis Farmers’ Market and similar projects in Portland and Newport. He also cofounded Oregon Tilth, a leading nonprofit certifier, educator, and advocate for organic agriculture and products in the U.S. and abroad. While serving as the organization’s first executive director, he wrote The Standards and Guidelines for Organic Agriculture, a landmark text in the field.

“Oregon Tilth had humble beginnings in my barn. Over the years, we’ve grown our endowment to $5 million and are recognized internationally for quality and integrity,” says MacCormack, who currently serves as president of the group’s charitable foundation.

Now focusing his activism on the politics of food, MacCormack is promoting the importance of growing and distributing food locally through projects like the Ten Rivers Food Web and the Southern Willamette Valley Bean and Grain Project. He was also involved in Benton Food Freedom’s bid to ban growing genetically modified crops.

In recent years, MacCormack has conducted workshops to help farmers transfer their land to the next generation. “Many small farmers in the U.S. are getting older and don’t have children who want to take over the family business,” he says. MacCormick and his partner, Cheri Clark, transferred their own farm to a young couple in October 2014.

“I’m now in a peculiar position in the organic farming community,” he says. “Having been here for 45 years, I’m one of the go-to elders. It’s a big responsibility that I take seriously. At the same time, I try to stay out of the way and make room for new leadership.”