Lewis & Clark College has again been named one of the top producers of Fulbright Award winners in the country, according to the U.S. Department of State’s Bureau of Educational and Cultural Affairs. The Fulbright Program is the government’s flagship international educational exchange program and provides grants to study, teach English, and conduct research in over 140 countries. 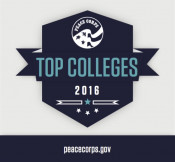 Additionally, the Peace Corps recently named Lewis & Clark one of the top 25 small undergraduate colleges on the agency’s list of 2016 Top Volunteer-Producing Colleges and Universities. Currently eight alumni are serving as Peace Corps volunteers. Since the Peace Corps was founded in 1961, 381 Lewis & Clark students and alumni have served.

For more than 50 years, Lewis & Clark has offered students opportunities to immerse themselves in cultures around the world through highly regarded overseas study programs.  More than 60 percent of students participate in these programs which travel to more than 30 countries, many outside of Western Europe, including Australia, Chile, Senegal, and Vietnam.

Office of International Students and Scholars