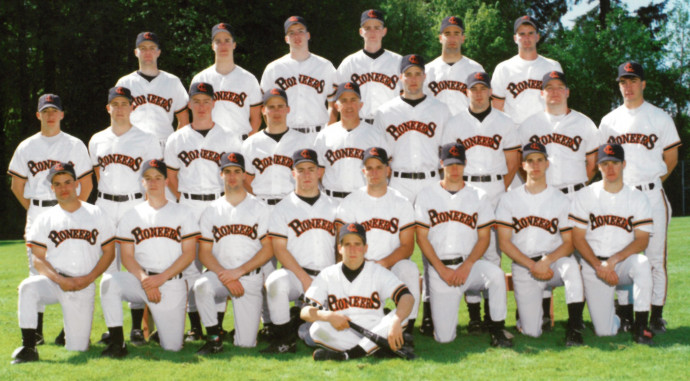 Every fall, Lewis & Clark inducts new members into its Athletics Hall of Fame at a Friday evening ceremony at the start of Homecoming and Family Weekend.

More than 165 former student-athletes and 19 teams have been enshrined since the Athletics Hall of Fame started in 1978. At this year’s ceremony on October 28, one team and five individuals will be inducted.

Lewis & Clark’s 2001–02 men’s basketball team was led by two-time Northwest Conference Player of the Year Scott Davis BA ’02 that season and featured two other All-NWC selections, John Mietus BA ’04 and Colin Oriard BA ’03. The Pios went 24-6 overall to win the conference for the second time in three seasons. In the NCAA tournament, Lewis & Clark defeated Claremont-Mudd-Scripps, Mississippi College, and Wisconsin-Oshkosh before losing in the regional final to Carthage, 85-70. To date, this is the only Lewis & Clark men’s basketball team to advance to an NCAA sectionals final, or “Elite Eight.” 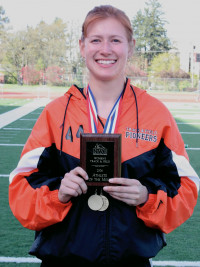 Kate Ross BA ’06Kate Ross BA ’06 closed out her Lewis & Clark career as an All-American after advancing to nationals and finishing second in the long jump. She still holds the Northwest Conference championship meet long jump record and finished as the long jump and triple jump champion at the 2006 NWC Championships, where she was the meet’s outstanding athlete. Ross holds the Lewis & Clark record in both events and is second all-time in the 400-meter hurdles after holding the record from 2005 to 2014, when Emily Thompson BA ’16 finally broke it. Ross was also a member of the Pios’ fourth-best 4x400 relay team. 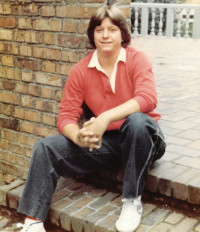 Mary Kay Plass BS ’84Mary Kay Plass BS ’84 both competed in and coached softball for the Pioneers. She was selected All-Conference First-Team and NAIA District III First Team in 1983, repeating the latter honor in 1984. Plass, who also competed in volleyball all four years, led softball in hitting and at-bats in 1983 and led at-bats, runs scored, and sacrifices in 1984. Later, she coached the Pio softball team for three seasons, finishing with a 29-38 record.

Jake Smith BA ’93 was a member of both the football and baseball teams, earning baseball All-Conference First Team, All-District II, and All-Area West Coast Team selections in 1993. The Pioneers won the conference and area championships in 1990, making the NAIA World Series. The team was inducted into the Lewis & Clark Athletics Hall of Fame in 2002. Over his four seasons on the diamond, the Pioneers finished with a record of 81-62, with 28 wins in 1992 alone. Smith also competed with Lewis & Clark’s championship football team in 1989 and the runner-up squads in 1990 and 1992.

During his time at Lewis & Clark, Jack Folliard BA ’69, JD ’74 began officiating basketball and, later, football, eventually reaching the heights of the Pacific-10, now Pac-12, Conference in 1982. Starting in 2002, Folliard became a referee for the conference, a position he held until retiring after the 2014 season and concluding a 33-year career in the field. He is now a supervisor of officials for the Pac-12. Folliard will receive a Lifetime Achievement induction at the October event.