Young Alum Finds Her Place on the Portland Stage 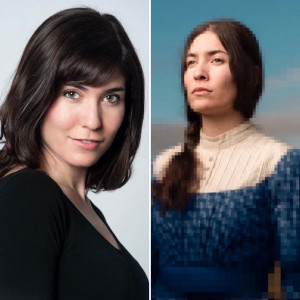 Portland Center Stage recently concluded its staging of a new original production, The Oregon Trail, which shone a spotlight on Lewis & Clark theatre alum Alex Leigh Ramirez BA ’10. She played “Then Jane,” a character whose historical struggles with oxen and bouts of dysentery in the 1840s counter the modern struggles of “Now Jane,” an apathetic teenager playing “The Oregon Trail” video game on her overachieving sister’s couch in the 1980s.

For Ramirez, the production was a welcome chance to work in a production about three strong female characters written by a young woman and directed by another. As she told Lewis & Clark, Ramirez appreciated that there were “really fleshed out characters… not about a love interest [but rather] about a young woman trying to find herself.”

Ramirez made her own journey north from California to attend Lewis & Clark, earning a bachelor’s degree in theatre. That led quickly to an acting apprenticeship with the Portland Playhouse. It was Lewis & Clark’s small theatre program and personalized attention that appealed to her.

“[There was] always a way to be involved with the shows… There were so many opportunities to be had. You could create your own path and create your own projects,” said Ramirez. As a student, she acted in productions of The Blue Room and The Memory of Water. The actor also took advantage of the college’s renowned overseas study programs, studying in India. Her time at Lewis & Clark, particularly working closely with Associate Professor of Theatre Michael Olich, kickstarted what would go on to be an extensive catalog of work on the stage.

Ramirez has now starred in productions of Antigone Project and Othello, in addition to an original one-woman show, Songbird, an autobiographical piece on the relationship between voice and voicelessness.