Poet Corey Van Landingham BA ’08 is a recipient of a 2017 National Endowment for the Arts Fellowship. Along with fellow alumnus and poet Nick Lantz BA ’03, the two poets are among just 37 poets selected from among 1,800 applicants.

Lantz, who earned his bachelor’s in Religious Studies before going on to earn his MFA at the University of Wisconsin, is assistant professor of English at Sam Houston State University and editor of Texas Review. His forthcoming new volume of poetry, You, Beast, will be his fourth.

Poet Susan Mitchell has said of Lantz’s new volume that it is a “…masterful and deeply moving collection that raises political and social questions urging us toward a new world where humans, animals, plants—even the cockroach—are worthy of respect.”

Van Landingham’s work has appeared in publications including The Best American Poetry 2014, Boston Review, and The New Yorker, whose Jan. 16 issue includes Van Landingham’s poem, “Gilly’s Bowl & Grille.” Van Landingham, in between earning her MFA at Purdue University and completing the prestigious Wallace Stegner fellowship at Stanford University, has stayed connected to the Lewis & Clark community. Recently she returned to campus for a poetry reading.

Her work also wrestles with violence in modern society. As Van Landingham explained to the Ashland Daily Tidings, one of the poems she submitted for the NEA grant, “Bad Intelligence,” explores the militarization of drones, which “mediate the body and distance the effects of technology … making people a kind of proxy for something real, stripping humanity from acts of war, so they begin to look like video games.” 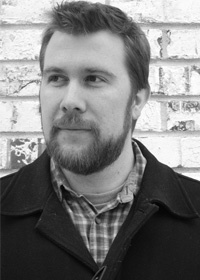 Lantz’s 2010 book of poetry, The Lightning That Strikes the Neighbors’ House, was selected by former U.S. Poet Laureate Robert Pinsky for the Felix Pollack Prize in Poetry.

Van Landingham grew up in the southern Oregon city of Ashland, a culturally rich community that she credits in part for her creative path. Currently a doctoral candidate in Creative Writing at the University of Cincinnati, and a book review editor for Kenyon Review, she plans to put the $25,000 award toward the publication of her next book.