What are the best ways to enforce campaign finance laws? A team of political science researchers seeks to find out.

America’s voters disagree sharply on many issues, as evidenced by the contentious presidential election, but a strong majority do agree on one question: campaign finance reform.

More than four in five Americans are convinced money plays too great a role in politics, and two-thirds assert the wealthy exert too much influence in the election process, according to a 2015 New York Times/CBS News poll. It comes as no surprise, then, that the public’s trust in government has been in steep decline for more than a decade, sinking to historic lows.

But the devil’s in the details, given that our campaign finance system is an unwieldy tangle of laws and loopholes that are erratically enforced. It’s that latter element—enforcement—that has captured the research interests of a team of Lewis & Clark political science professors and students. Together, they are delving into the often-overlooked impact of campaign finance law enforcement, both formal (criminal charges, fines) and informal (voter opinion).

“There are tremendous debates in our country about campaign finance and what the laws should be,” says Associate Professor Todd Lochner, chair of the political science department and originator of the project. “But if the laws on the books are not credibly enforced, they’re meaningless.”

For the Lewis & Clark students involved, the project is a unique opportunity to do serious scholarly research and publish in academic journals while still undergraduates. Participating in the project, they say, opened their eyes to the pervasive influence of money in politics.

“Usually, when you think about campaign finance, you think about rich donors and corrupt politicians, but this project has shown me how many ways there are to break the laws,” says Zane Dundon BA ’18, one of two students currently working on the project. “I’ve become so much more aware of how money can have an impact on elections at every level.”

The Lewis & Clark project studies the effectiveness of campaign finance laws by examining how well states enforce them. The researchers have dug deep into statistics about campaign finance law violations, examined politicians’ and voters’ perceptions of enforcement, and reviewed media coverage related to campaign violations and scandals. Their goal is to better understand the reasons why—or why not—current laws are actually working to keep politicians honest.

The idea for the project came from Lochner, who holds both a JD and a PhD, and teaches American politics, constitutional law, civil liberties, and a joint undergraduate–law school course on election law. Early in his career, he gravitated toward the study of campaign finance after noting most political scientists focused on the subject’s legal and political ramifications, with less attention to how those laws are actually applied.

“We were going to be running regressions [comparing variables in order to make mathematical predictions] and manipulating data, so Ellen’s involvement was key,” Lochner says. “That’s one of the really nice things about the political science department—its synergy.”

The professors conceived the project with students in mind. After all, the opportunity to interact with student researchers was a major reason they came to teach at Lewis & Clark, where, Seljan notes, “I can produce high-quality research and get to know and work with amazing students.”

Lochner adds that they weren’t interested in “a top-down model where we just ordered students to do this or that.” Instead, the professors wanted students to be involved as partners in every aspect of their work. “We wanted to work with students as peers,” Lochner says.

To fund the project, the professors secured an Andrew W. Mellon Foundation grant (part of the college’s $700,000 Mellon gift to fund faculty-student collaboration) during summer 2013. They then handpicked two of their strongest students—Maya Gold BA ’14 and Walker Davis BA ’15.

“A lot of liberal arts colleges advertise themselves as places where you can work closely with professors,” Gold says. “I don’t know how much I really believed that before coming to Lewis & Clark, but it totally happened!”

The students worked alongside their professors throughout the summer and into the 2013–14 school year, collecting enforcement data and conducting a nationwide survey of state legislators, then analyzing what they found. The work yielded two articles published in scholarly journals with credit to the professors as well as the students—a rare distinction for undergraduates.

“A Rising ORESTAR,” published in the Willamette Law Review, examined how the advent in Oregon of electronic filing and disclosure of campaign finance data affected enforcement.

The team reviewed more than 9,000 campaign finance cases to determine whether electronic data keeping by the state elections division would increase the number of complaints about violations. They found that e-filing did, indeed, fuel an “exponential” increase in reported violations. They also credited Oregon’s new monitoring system (the ORESTAR of the paper’s title) for enabling the state to maintain consistent enforcement despite the surge in cases.

Their next article, “I Know What You Did Last Cycle,” examined campaign finance in state legislative races nationwide and appeared in the peer-reviewed Election Law Journal. For this piece, the professors and students designed and conducted a nationwide survey of state legislators to gauge whether perceptions about campaign finance enforcement influenced compliance with the laws and what state regulators could do to improve their credibility.

The survey indicated that lawmakers believed about one-third of violations went undetected. The researchers determined that added enforcement, including random audits and improved transparency, could change perceptions about accountability and serve as a deterrent.

By all accounts, the collaboration between professors and students proved a success, and the articles were well received. The students had the opportunity to present their findings at the Western Political Science Association Conference, as well as at Lewis & Clark’s Festival of Scholars, an annual event in which student scholars and artists showcase their work to the campus community.

→ Learn how Walker and Gold parlayed their academic experience into jobs

By 2016, Lochner and Seljan were prepared to embark on another round of campaign finance research. Ben Gaskins, assistant professor of political science, serendipitously overhead them discussing their plans and volunteered to join the team. An expert in religion and politics, he brought extensive experience in survey research and experimental data analysis.

“I saw it as an opportunity to collaborate with colleagues as well as students,” Gaskins says. “It was exciting to watch the students become experts, leading discussions and learning by doing.”

The reconstituted team built on its previous work, conducting a survey to see whether U.S. voters care about campaign finance violations. They also analyzed national and regional news coverage of campaign finance to determine whether news of such violations and/or scandals influenced public perceptions of candidates or changed whom voters might have supported. In that way, the researchers could determine whether such informal mechanisms of enforcement were effective.

During summer 2016, Gaskins and Seljan worked on constructing the voter survey, while Kowal and Dundon reviewed hundreds of newspaper articles about campaign finance, coding the content to create a robust database they could use to draw some conclusions.

“Everyone was involved in every part of the work,” Kowal says. “The professors did a great job of being open to questions from each other and from us, too. It was a fun, creative process.”

The collaborators continued meeting regularly through the fall term to put finishing touches on their first article exploring voter perceptions of campaign finance violations, which will be submitted to journals for publication later this year. Once that work is done, the team plans to tackle a second paper detailing their findings about the impact of media coverage.

Both Kowal and Dundon foresee pursuing careers in public policy after graduation. Kowal is exploring science policy internships in Washington, D.C., and can imagine herself working as a college professor one day. Dundon has another academic year to go before getting his degree, but sees graduate school and a position at a think tank as likely career possibilities.

Both agreed that doing campaign finance research expanded their worldviews. Although they admitted to some cynicism about the political system, they want to play a part in changing it for the better. Their experiences at Lewis & Clark strengthened their resolve to make a difference.

“We’ve shed a little light on certain problems, and it just makes me want to work to fix them,” Kowal says. “America is so divided, everything is good guys versus bad guys. I’m so much more aware of how complex our system is and why we need to start at a place of understanding—not just of each other, but of the system—if we’re going to get anywhere as a country.” 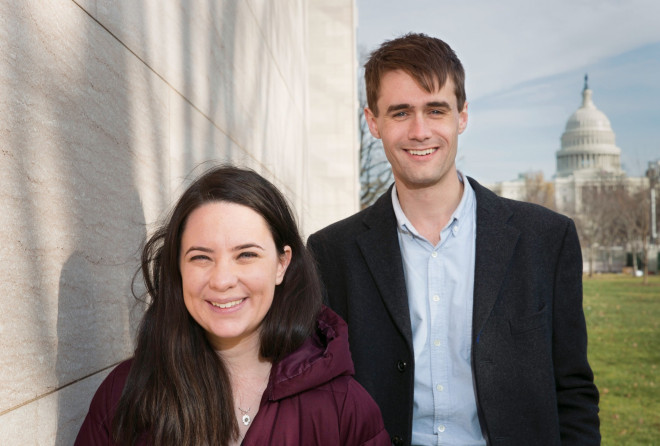 Joining the CREW to Expose Corruption and Influence

Both work as research associates for a nonpartisan nonprofit called CREW—Citizens for Responsibility and Ethics in Washington. CREW’s stated mission is to use “aggressive legal action, in-depth research, and bold communications to reduce the influence of money in politics and help foster a government that is ethical and accountable.”

The recent alumni have published articles ranging from Davis’ report on members of Congress going on fundraising vacations with lobbyists to Miami Beach to Gold’s investigation detailing how private prison companies are pouring millions of dollars into state lobbying efforts across the country.

Davis applied for a position at CREW soon after graduation, his interest in campaign finance sparked by his work on the Lewis & Clark research project and his thesis. He says, “I put all my eggs in that basket.”

He won the job, and his now-boss told him his research experience at Lewis & Clark was a major factor.

“That certainly stood out,” says Matt Corley, CREW’s research director. “Both Davis and Gold had specific experience, not just taking classes, but actually coauthoring articles with professors, which showed their work ethic.”

After graduating, Gold worked at some nonprofits but wanted to return to “work on money and politics.” Davis put in a good word for her at CREW, and she was hired last summer.

Gold says, “It’s a perfect job because it has the social justice component as well as the intellectual rigor.”

Unlike the academic papers they authored in college, their writing for CREW “names names” in targeting individuals and organizations involved in questionable activity. Davis says it took some time to adjust to the harder investigative edge of CREW: “It’s a totally different way of presenting information.”

Corley says they’ve done an excellent job transitioning. “They’ve both taken to their jobs with gusto.”

Davis credits his experience in college not only for helping him get the job, but also for giving him the skills to be successful. He says, “At Lewis & Clark, I began to develop the skills this job requires—analytical reading, critical thinking, the ability to recognize patterns and think ahead.”

Both Davis and Gold have stayed in touch with their college mentors as they start out their careers.

“It is very gratifying and also validating,” says Associate Professor Todd Lochner. “How wonderful to think we’ve helped motivate them to care about something we care about and that they’re learning so much.”