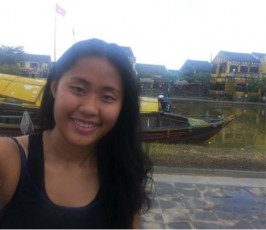 Rose Ngo BA ’17, a psychology major, has secured a Davies-Jackson Scholarship to study at the University of Cambridge beginning in the fall of 2017. Administered by the Council of Independent Colleges, the scholarship grants exceptional students who are among the first in their families to go to college the opportunity to study at the world-renowned St. John’s College.

Ngo, who entered Lewis & Clark with the benefit of the college’s Charles C. Spalding Scholarship, has dedicated herself to public service on and off campus. She has volunteered her time to Operation Night Watch, a Portland-area nonprofit organization providing resources to the region’s homeless population, and currently works at Information Technology at Lewis & Clark.

Ngo has also taken full advantage of Lewis & Clark’s celebrated overseas study opportunities. During a semester spent studying in Vietnam—her first time overseas—Ngo researched a range of topics, from perceptions of beauty and family dynamics to happiness and depression. Ngo, who grew up in the United States to parents who emigrated from Vietnam, described her experience in Vietnam as “being exposed to a culture that is my own, yet still foreign.”

Producing multiple Davies-Jackson scholars is rare. Lewis & Clark is now one of only two colleges to produce more than one winner since the scholarship’s inception in 1990, and remains the only college in the Pacific Northwest to produce a winner. Ngo is the second Lewis & Clark student to be awarded the scholarship, following Alex Kraemer BA ’15, a history major and English minor who will receive his degree from St. John’s College in 2017.

Ngo intends to use her scholarship to read for psychological and behavioral sciences, a two-year course that will lead to a “Cantab” degree, equivalent to a Master’s degree in the US.

Speaking to her academic experience at Lewis & Clark, Ngo explains “I was fortunate to have an amazing group of people, outside my friends, who continuously challenged, guided, and inspired me. My professors, supervisor, and coworkers showed me unconditional positive regard, and they should be recognized for their dedication and hard-work. Without them, I wouldn’t have gotten this scholarship”.