Taking Her Ministry on the Road

To be a nun is to pursue a calling. But Sister Susan Rose Francois never imagined her calling would take her on a national tour aboard a full-size motor coach.

The 24-city bus tour was organized by a Catholic nonprofit called Network, which educates, organizes, and lobbies for economic and social transformation. Every year since 2012, Network has organized Nuns on the Bus around specific social justice themes. Last year’s theme was “Mend the Gaps.”

In July, Francois and her fellow nuns from various orders headed to the Republican National Convention in Cleveland. On the streets outside Quicken Loans Arena, they stopped passersby and offered free cups of lemonade. “We thought it might help sweeten the sour political conversations swirling around our country,” says Francois.

Armed with clipboards, they asked people the same three questions: Who in your family is it difficult to discuss politics with and why? What worries you about this election? What gives you hope for our nation?

When told the nuns would ask the exact same questions at the Democratic National Convention in Philadelphia, people began to soften.

“Listening to views completely different than mine—without judging—was one of the most transforming experiences I’ve ever had,” says Francois. “If we focus solely on what divides us, we’ll never move forward together as a nation.”

Francois is a Catholic nun with the Sisters of St. Joseph of Peace, a New Jersey–based order that strives to promote peace and justice through prayer and action. At 44 years old, she’s the youngest member of her congregation’s leadership team, serves as vocation director, writes guest blog posts, and hosts her own personal blog (At the Corner of Susan and St. Joseph).

“I was editor of my high school newspaper,” she says. “I consider blogging part of my ministry, a way to connect the personal with society’s larger story.” 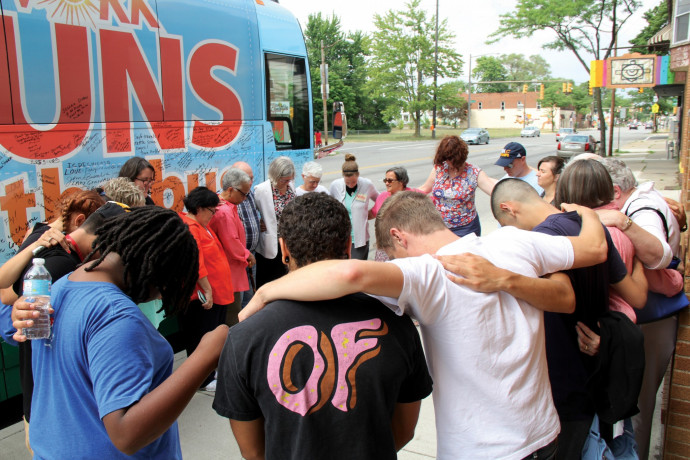 A group hug at a stop along the Nuns on the Bus tour.

Francois grew up in Maryland, where her father was a local elected official and her mother worked with prisoners. She chose Lewis & Clark for its beauty, academically stimulating environment, and social conscience. She calls the college “a center for good in the world, a place that trains people to care and to participate.”

“I went to Catholic school for 12 years,” she says, “but was no longer practicing my religion in college.” Instead, Francois gravitated to the study of political science and history. “Professor Don Balmer, my political science advisor, helped guide me to the City of Portland, to work within the system and create change,” she says.

Following a celebratory graduation trip to Europe in 1994, Francois worked in local government. She quickly rose to the rank of city elections officer and management analyst. Then 9-11 shook the nation, and the Second Gulf War began to unfold.

“I became active as a Catholic again, working with the vibrant St. Philip Neri community in Southeast Portland,” she says. “I knew in my heart that peace needed to come from a place other than anger. And I knew my place was no longer in government.”

In 2006, Francois became a novice nun, taking her final vows in 2011. She did post-graduate pastoral studies at Seattle University and earned a master’s degree in theology, ethics, and spirituality at Catholic Theological Union at Chicago.

Today, fostering a sense of community both motivates and fulfills Francois. “To paraphrase Gustavo Gutiérrez, one of my favorite theologians,” she says, “Hope doesn’t come out of the sky. We need to create it.”