Students Win Grant to Work Toward Peace in Post-Conflict Uganda

For the 11th consecutive year, Lewis & Clark has been awarded a 100 Projects for Peace grant, a program that empowers young ideas for conflict prevention, resolution, and reconciliation. The program has awarded grants to at least one Lewis & Clark team every year since its inception.

The three students involved in this year’s winning Lewis & Clark proposal, Max Clary ’18, Seren Villwock ’19, and Nellie Trenga-Schein ’17, will focus on preventative nutritional education and soil and water conservation measures to promote food security and economic empowerment. Working in the Ogur subcounty of northern Uganda, this two-month summer program aims to teach peaceful livelihood and sustainability to former child soldiers and those affected by the war. 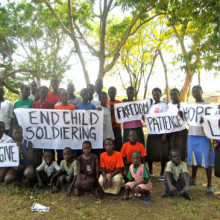 The project has been in the works for two years, with the team spending the summer of 2016 in northern Uganda studying the dynamics of post-conflict recovery and creating ties with local NGOs, including partner organization Children of Peace Uganda (CPU).

Clary, a chemistry major, has been committed to community service and poverty alleviation since high school. He currently serves as the student area coordinator for the Oregon chapter of Amnesty International and teaches English to local immigrants and refugees. Villwock, a biology major, is passionate about issues of food insecurity and homelessness, and gained new appreciation for the upcoming project after taking a field-based course in peace and conflict studies based in Gulu, Uganda, in the summer of 2016.

Trenga-Schein, a biology major, has spent her college career working on human rights and health education in Zanzibar, Uganda, and across the United States. Following graduation, Trenga-Schein will pursue her master’s degree at the University of Exeter in the United Kingdom and then attend medical school, aiming to work for Doctors Without Borders or an international NGO.

“Our time in Uganda this past summer educated us to what daily life is for the communities that were impacted most by the war,” said Trenga-Schein. “Through this project and founding KareMeKuc, we are working to use our privilege to try to help build a brighter future for the children who grew up in war. We hope to continue to share their stories and educate our communities because we know once people learn about what happened they will not be able to forget, and will want to help make a difference for the future.”

Founded by philanthropist, scholar, and world traveler Katherine W. Davis, the $10,000 Projects for Peace grants have been used to fund projects addressing a diverse range of challenges, including providing sexual health education in Nicaragua, improving quality of life in China through motorcycle repair, and, most recently, hosting a summer camp for youth affected by homelessness in Egypt.

100 Projects for Peace at LC