On September 29, Danial Afzal BA ’12 enjoyed the latest win for his short documentary, The Survivor. Out of 120 films screened, his was chosen for Best Documentary at the Chicago South Asian Film Festival. The award, Afzal’s third for this project, marks the sixth international premiere for the film, having screened in Egypt, Turkey, and England throughout 2017. The topical content of the documentary provides the audience with more than just entertainment value, and emphasizes the critical intersection between education and media.

The Survivor follows the life of Muneeb Khan, a young man from Peshawar, Pakistan, who lived through the Taliban attack on the Army Public School in December 2014. While Muneeb managed to escape, his brother, Shaheer, was killed in the attack. Afzal’s documentary explores the aftermath of this trauma and the ways in which survivors move forward while a family grieves. Despite covering the deadliest terrorist attack to occur in Pakistan, his film is the first to explore the event that reverberated around the world.

With a degree in communication, Afzal is no stranger to the interaction between mass media and individual lives. During his time at Lewis & Clark, Afzal immersed himself in the college community by serving on the Campus Activities Board and as an active member of the International Students of Lewis & Clark (ISLC). A graduate of the Academic English Studies (AES) program, he brought a unique voice and perspective to the student population by participating in the annual Ray Warren Symposium, contributing to the Pioneer Log, and appearing in student theatre productions.

Filmmaking is Afzal’s tool of choice to expose the public to the intimately personal ramifications of an event that has, at times, been reduced to its statistical significance. On his win at the festival, Afzal is humbled and hopeful for the future. 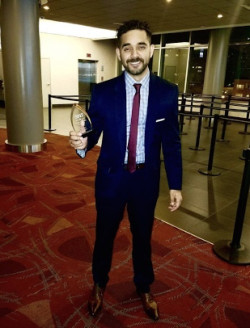 “It was just a great moment to not only accept the award for the hard work my team and I put into this project, but also network with some big filmmakers and actors from Bollywood,” he says. “We also had a DePaul University representative attend our premiere to possibly consider Muneeb (my subject) for admission into their school of game design.”

Prior to its win in Chicago, the film garnered the Best Documentary Short at the 2017 IMPACT DOCS Awards in California and Best Documentary (Concept) at the 11th Edition FiLums International Film Festival in Pakistan.