The Rise of Microcredit

Sociology researchers explore the disconnects between lenders and borrowers on the ground in Cambodia.

The Rise of Microcredit 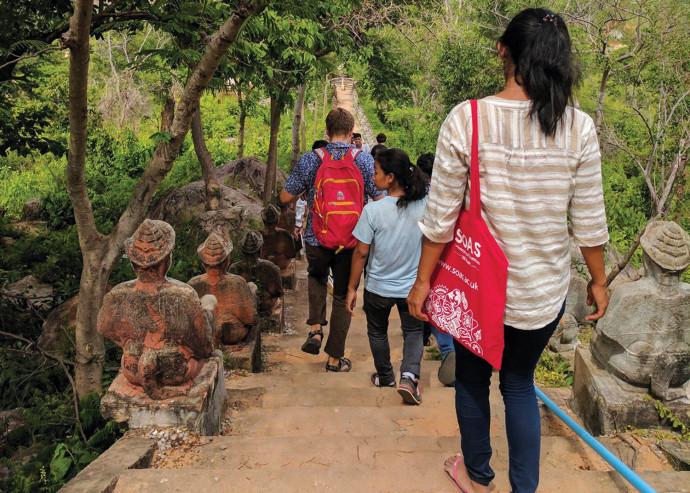 Thunder rumbled in the hot, humid air, promising rain. The team had traveled more than 7,000 miles from Portland to rural Siem Reap Province to interview its citizens about their experiences with debt and dashed dreams of better lives.

Sitting eye-to-eye with villagers in their wood-stilt homes, the scent of simmering curry in the air, they heard heartbreaking stories. A young father told them about taking out a loan to fund his journey across the border into Thailand for job opportunities. He failed to find employment and returned home worse off than before, necessitating the sale of his family’s only remaining farmland to pay the debt. A widow described borrowing money to expand her modest duck farm. She ended up getting sick and needing the money to pay for medicine and doctor visits. She’s still struggling to make enough to repay the loan.

Assistant Professor Maryann Bylander led her team of three sociology students to Cambodia as part of a project examining the country’s multibillion-dollar microfinance industry. They conducted interviews with players on every side of the issue: microfinance institution managers, government officials, and most important of all, the borrowers who risked—and sometimes lost—so much in the hope of a better life.

“Microfinance has a tremendous social and political impact,” says Bylander. “There’s the rhetoric of what microcredit is supposed to do, and then there’s the reality.”

Microfinance has a tremendous social and political impact. There’s the rhetoric of what microcredit is supposed to do, and then there’s the reality.”Maryann BylanderAssistant Professor of Sociology

An Explosion in Microcredit

Microcredit originated in Bangladesh in the early 1980s as an economic development tool for developing countries. Designed to reduce poverty and encourage self-reliance, microcredit involves making small business loans available to low-income people who otherwise wouldn’t qualify for traditional loans—mostly rural residents and often women. A seamstress might take out a loan to purchase a sewing machine to start a dressmaking business, or a mechanic might buy a set of tools to fix electric motors.

The global microfinance sector has exploded in recent years, reaching an estimated $60−100 billion in loans outstanding. Worldwide, microloans average about $1,000, with interest rates typically at 30 percent or above (although Cambodia’s government recently capped those rates at 18 percent).

Cambodia has emerged as one of the world’s fastest-growing markets for microfinance. The international development community saw microfinance as a way to rebuild its economy following the brutal Khmer Rouge regime, which carried out a genocide in the 1970s that resulted in the deaths of at least 1.5 million people. Today, one in five Cambodians have taken out such loans, totaling more than $6.8 billion, according to the Microfinance Information Exchange.

However, critics claim that microfinance has failed to have a significant impact on relieving poverty. And by trapping many poor people in deep debt—often at exorbitant interest rates—it could be argued that microcredit is hurting those it’s supposed to help.

Maryann Bylander, who joined the Lewis & Clark faculty in 2014, studies the social and cultural processes that shape credit-debt relationships as well as issues related to migration, development, and gender. She jumped at the chance to engage her students in important work in a country where she has deep connections. Bylander spent several years in Cambodia while working as managing director and founding board member of PEPY, a nonprofit that focuses on education and youth leadership in rural areas. She also wrote about Cambodian migration to Thailand as the subject of her doctoral dissertation in sociology at the University of Texas at Austin.

“Cambodia can be a challenging country to navigate,” says Bylander. “The infrastructure, particularly in rural areas, is still developing, and communication and transportation can be difficult. However, I knew the opportunity to conduct research there would have a lasting influence on my students.”

Cambodia can be a challenging country to navigate. However, I knew the opportunity to conduct research there would have a lasting influence on my students.” Maryann BylanderAssistant Professor of Sociology

Bylander was interested in exploring how stakeholders across the microfinance sector understand the causes of overindebtedness. To assist in this endeavor, she recruited three sociology/anthropology students who had excelled in her courses: Peter Bradley BA ’19, Lacey Jacoby BA ’17, and Andrea Blobel Pérez BA ’19. The faculty-student research team quickly immersed themselves in the project, from writing a proposal for a $20,000 grant to the ASIANetwork (a consortium of American colleges working to strengthen the role of Asian studies in the liberal arts) to planning the three-week itinerary for their June trip.

Before leaving campus, the students took a crash course in Khmer, the official language of Cambodia, and met with a group of Lewis & Clark international students from Cambodia for tips on cultural etiquette. “The Cambodian students on campus proved to be an invaluable resource,” says Bylander.

Viewpoints Once on the ground in Cambodia, the team’s first stop was Phnom Penh, the country’s bustling capital of roughly 1.5 million people. Navigating the city’s crowded streets, Bylander and her students made their way to the offices of those primarily on the lending side of the equation. Working as a team, they interviewed executives of microfinance institutions (known as MFIs), employees of microfinance partner institutions, and trainers in financial literacy. They also met with academics and journalists to get an overview of microcredit’s role in the country’s economy. Their goal was to understand how each of these stakeholders views the nature of overindebtedness and its potential solutions.

“This was my first time conducting interviews alongside other researchers,” says Jacoby. “We spent our time between interviews debriefing, reflecting on our personal interview styles, and planning how to improve our next interview. Interviewing is an art in and of itself, and group interviewing requires particularly thoughtful collaboration.”

After their stint in the capital city, Bylander’s team traveled to the countryside to focus mainly on borrowers’ perspectives. Based in Siem Reap, a popular tourist destination near the famed temples of Angkor Wat, they ventured into remote villages to conduct face-to-face interviews. They collaborated with six college students from the PEPY nonprofit, who served as translators, research partners, and cultural interpreters.

“Our project would likely not have been as successful and eye-opening for me without the collaboration with Cambodian students,” says Bradley. “Through these interactions, I was able to learn about the challenges and differences of being a young person in Cambodia. I also benefited from their perspectives on credit and debt as well as their knowledge and experiences of life in rural areas.”

Working alongside the PEPY students, Bylander and her students met borrowers in their modest homes, constructed on stilts to prevent flooding during the country’s monsoons. The interviewees described scenarios where they had borrowed money to improve the lives of their families but wound up burdened by debt.

“Personally, I was frustrated to see how borrowers would not blame the microfinance institutions or the lack of regulation for their situations of overindebtedness,” says Blobel Pérez, a Davis United World College Scholar who grew up in Chile. “I simply did not understand why there was no resistance against predatory forms of lending.”

Debt as an Individual vs. Systemic Issue

To be sure, Bylander notes, many borrowers have positive experiences with microcredit, but as the number of borrowers multiplies, problems are becoming more common. The official narrative states that microloans are the means to develop a more prosperous society.

But the students got to see first-hand that microloans have many unintended consequences. They learned that, in many cases, microloans went to pay for basic needs, such as health care or home improvements, rather than going to support budding entrepreneurs. They also saw that debt was often entangled in family and social obligations that create their own pressures—for example, when borrowers took out loans for relatives lacking collateral.

Cambodians’ tendency to place blame exclusively on the victim—in this case, the borrower—matters because it ends up shaping how policy makers respond to the debt crisis. Instead of addressing systemic societal issues, they end up focusing on the individual’s financial literacy, which may ultimately be of limited value if underlying conditions don’t change.

In addition to gaining on-the-ground experience, Bylander’s students engaged in other activities that exposed them to the full arc of a professional research project. Prior to leaving Cambodia, the Lewis & Clark team gave two presentations about their preliminary findings. In Siem Reap, they held an event modeled on an interactive presentation style called “theatre of the oppressed,” in which the students performed sketches based on people they had interviewed as the audience helped direct the action. The idea was to challenge Cambodians’ widely held idea that individuals alone are responsible for their overindebtedness when systemic issues are, in fact, also in play. Later, the Lewis & Clark team gave a more traditional academic presentation at the Royal University of Fine Arts in Phnom Penh, which was attended by senior leaders in the microfinance sector, journalists, senior academics, and graduate students.

Cambodians’ tendency to place blame exclusively on the victim—in this case, the borrower—matters because it ends up shaping how policy makers respond to the debt crisis.

“Despite the language barrier, the Lewis & Clark students were very actively engaged with the people and culture in Cambodia,” says Phasy Res, a Cambodian researcher who worked closely with the group. Res notes that the students raised challenging issues related to microcredit that Cambodians themselves might not have asked: “As outsiders, they offered very important perspectives to the research.”

Back in Portland for the fall semester, Bylander and her team presented their findings to the campus community and collaborated on writing a formal paper they plan to submit to an academic journal. “The writing process has been another act of skill building in how to effectively analyze our field research, fluidly incorporate current literature on the topic, and improve our writing,” says Bradley. In the spring, Bylander and Jacoby plan to present the team’s work at the ASIANetwork annual conference in Philadelphia.

All of the students said the trip connected to their career goals. Jacoby, who graduated last spring, hopes to pursue a career in global health; Blobel Pérez is considering graduate school in social work or marketing; and Bradley hopes to get involved in experiential education.

This past fall, Bylander returned to Cambodia on a Fulbright ASEAN fellowship to extend her scholarly work. She is conducting qualitative research for a book manuscript on how debt shapes migrant experiences across Southeast Asia. From Bylander’s perspective, the summer Cambodia trip was critical in helping her develop a network of scholars in the region. She is also currently in the process of developing a new course, titled Debt and Its Discontents, which will incorporate much of the reading her team has done for this project. In the future, she hopes to lead a new overseas study program for the college in Southeast Asia.

As the group wrapped up their summer project, everyone involved agreed that the experience was transformative. As Bylander notes, “Even if my students ultimately don’t become sociologists who study microfinance in Cambodia, they have had a rich experience that has changed how they view the world.”

Romel Hernandez is a freelance writer in Portland.
Photos courtesy of Assistant Professor Maryann Bylander and her students.