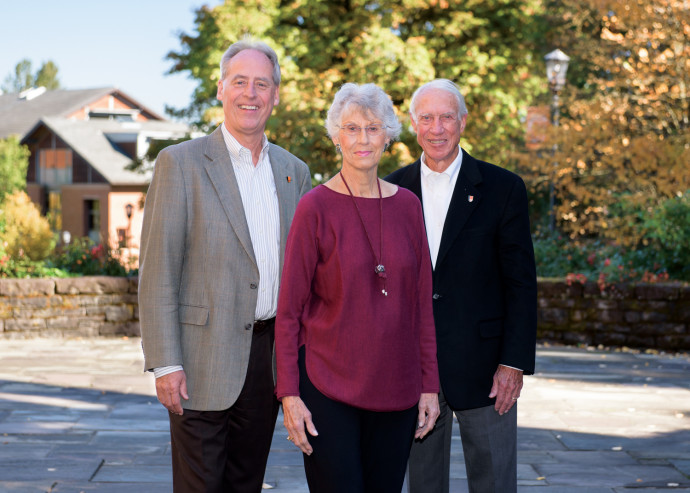 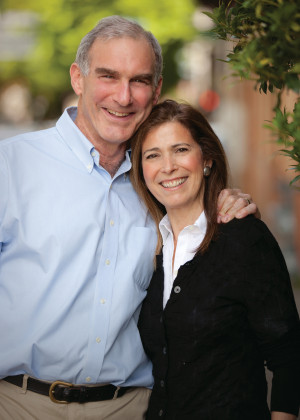 Irving Levin and Board Chair Stephanie Fowler MA ’97On October 19, the eve of the Board Meeting, trustees, life trustees, and college officials gathered at the Cooley House for dinner. After President Wim Wiewel and his wife, Alice, welcomed the guests, Wiewel gave the floor to Board Chair Stephanie Fowler MA ’97, who announced that she and her husband, Irving Levin, were making a significant pledge: “In order to encourage the rest of you, we intended to give the first million-dollar gift of the campaign, but circumstances intervened, and now I’m happy to report ours is one of two million-dollar kickoff gifts. I’m delighted to share this stage with our beloved former chair and his wife.”

She then turned to Susan Bates, who announced that she and her husband, Life Trustee John Bates, were making a million-dollar gift of their own for entrepreneurship at Lewis & Clark. “With strong leadership in place, John and I are happy to provide a foundation of support. The Center for Entrepreneurship is so important for students and the public. With this gift we want to give them more to work with, to enhance the center’s great work and to make it soar,” said Susan Bates.

The next day, in an executive session of the board meeting, Trustee Pat Mahaffy BA ’85 pledged an unrestricted million-dollar gift to Lewis & Clark. “As we gear up for a campaign, we are happy to add to the momentum begun by John and Susan’s and Stephanie and Irving’s gifts,” said Mahaffy. “We have a great and unique institution, and we need to ensure it is financed to face the challenges—and address the opportunities—of higher education in the twenty- first century.”

“I just couldn’t be happier,” said President Wiewel. “Stephanie and Irving and John and Susan and Pat have been longtime supporters of Lewis & Clark and other great causes. Stepping forward now and leading by example is so important. We can help our students, who are so motivated, to acquire even more skills and focus to be even more successful.”

In honor of John’s dedicated service to Lewis & Clark, both on the faculty and on the board of trustees, the entrepreneurship center will be renamed the John E. and Susan S. Bates Center for Entrepreneurship and Leadership. Focusing on the liberal arts in action, the center is a practical and natural extension of what happens in the classroom every day. Offering courses, workshops, connections, and a weeklong seminar held over winter break, the Bates Center brings together students, faculty, and alumni from all three schools at Lewis & Clark to imagine and build a better future.

John Bates chaired the Lewis & Clark Board of Trustees from 2003 to 2007. He served as associate professor of finance at Lewis & Clark from 1975 to 1981. He was named Outstanding Teacher of the Year in the College of Arts and Sciences in 1976. John and Susan led our overseas study program to Belgium, the Netherlands, and Luxembourg in 1979. John has also held key positions on Wall Street and founded Bates Private Capital, a firm in Lake Oswego, Oregon, that grew to more than 200 employees.

Board Chair Stephanie Fowler MA ’97 is a director of The Renaissance Foundation, a family foundation established with her husband, Irving Levin, to promote educational access, service to those in need, and environmental preservation. The foundation’s primary work is providing scholarships for first-generation college students. Fowler is also a psychotherapist and retired journalist. She was a political reporter/analyst at KGW-TV and KOIN-TV and hosted a weekly public affairs program, Seven Days, on Oregon Public Broadcasting. She was the first woman to serve on the editorial board of the Oregonian, where she wrote editorials and columns.

Pat Mahaffy BA ’85 is president and chief executive officer of Clovis Oncology, a biopharmaceutical company focused on acquiring, developing, and commercializing innovative anticancer agents. At Lewis & Clark, Mahaffy majored in international relations and participated in the overseas study program in France. He later earned a master’s degree at Columbia University’s School of International and Public Affairs. 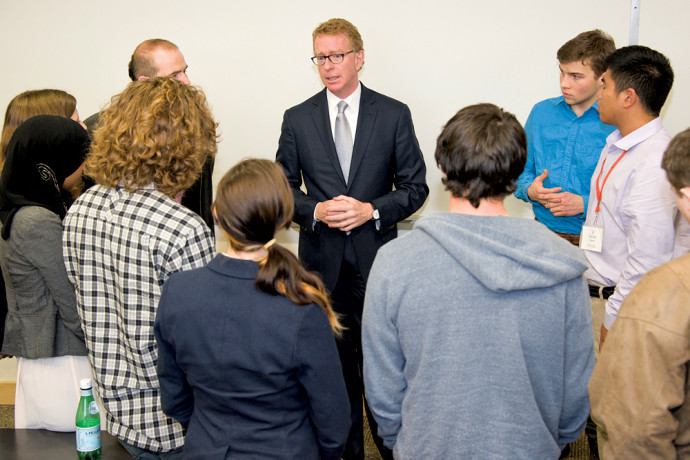