For evidence that no one Lewis & Clark experience resembles another, look no further than Matthew Nelson BA ’08. For Nelson, graduating as a world languages major with a concentration in Russian and Spanish was not inspired by extensive traveling or political aspirations. Rather, it was inspired by a high school love for Russian literature.

“I read Chekhov’s short novels during my senior year of high school, and was immediately captivated by the characters, places, and cultural practices depicted within those stories,” Nelson remembers. “I continued reading famous works of Russian literature throughout my first year at L&C, and finally decided to enroll in Russian 101 and a Russian literature survey course during my sophomore year.”

Both courses were taught by Associate Professor of Russian Tatiana Osipovich, who Nelson cites as the primary reason for his ability to work and study abroad. Upon graduating, and with the help of Osipovich, Nelson was selected for a Fulbright English Teaching Assistant Program in Russia. It was there he introduced his innovative brand of English language instruction that continues to this day. As a Fulbright scholar, Nelson developed “Ramblin’ Across Russia: Accessing Culture and Language Through American Folk Music,” a project designed to aid English retention through musical study and performance. 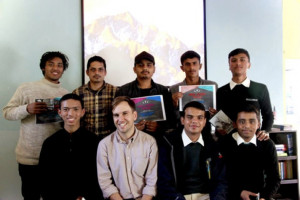 This unorthodox approach reflects Nelson’s commitment to the most effective, cutting-edge teaching methods. Today, he works as an English language fellow with the U.S. Department of State, a highly respected English language program.

“I have traveled to remote areas of Nepal to conduct workshops on topics such as communicative grammar teaching, digital storytelling, and integrating language and content instruction,” Nelson explains. “I love guiding students in activities and projects that combine English language learning with other forms of expression and creativity. From a teacher’s perspective, these projects are great because they easily integrate the four language skills: listening, speaking, reading, and writing”.

Take, for example, his two-month English Through Music course, in which students worked in an open-source electronic music programming environment. While many programs rely on methods of repetition and recitation, Nelson believes that projects encouraging free self-expression are critical for success.

On his time at Lewis & Clark, Nelson says he learned how to be “self-aware and critical of how [his] actions are related to historical, social, and ideological structures,” something he maintains today through his work in language instruction. “I think English teachers working in other countries should support efforts to develop local language education and literacy alongside English. And we should all be encouraged by, and encouraging of, the way English is being adopted and modified by speakers in countries all over the world.”

“Language change is constant, unavoidable, and beautiful. If we can embrace this idea and stop seeing language variation only in terms of errors and mistakes, then perhaps we can do a small part to level the playing field.”