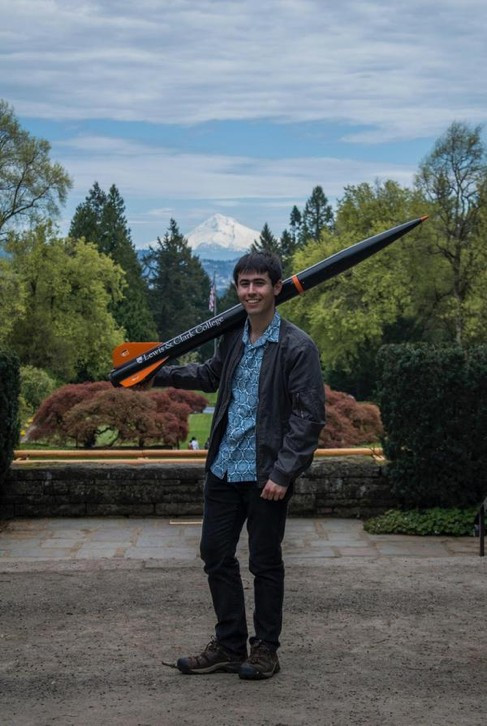 Benno Kolland BA ’21 has just completed his first year at Lewis & Clark, but he’s already accomplished something some people only dream of doing: designing and building his own rocket, with the goal of investigating cost-effective solutions for rocket propulsion. The rocket, which Kolland constructed for an independent physics project, was designed to reach an altitude of two miles and record data about speed and acceleration over the course of its flight.

Kolland’s interest in propelled flight began in his early teens, when he started flying remote-control airplanes. He then graduated to launching rockets in science fairs. Since coming to Lewis & Clark, he has worked closely with professors from various fields of math and science, particularly the physics department.

When I chose Lewis & Clark, I knew I wanted to be able to go beyond just math and physics theory. Being able to do independent study as a first year has been an amazing opportunity, and I’m excited to keep it going. Benno Kolland BA ’21

“The entire Lewis & Clark physics department is great, and I especially appreciate the encouragement and guidance I’ve received from staff members Steve Attinasi and Alan Younis, and Professors Michael Broide and Stephen Tufte,” Kolland said. “For me, the best learning comes from getting your hands dirty and conducting real experiments, and they’ve encouraged that.”
This April, Kolland’s hard work was put to the test when he launched his rocket at the Oregon Rocketry site 20 miles east of Bend. The target height was inspired by Mount Hood, which is visible from campus on clear days and stands 11,250 feet tall. The launch didn’t disappoint: the completed rocket, proudly emblazoned with Lewis & Clark’s colors, reached a height of 12,025 feet, well exceeding its goal. Deploying a parachute, it landed a mile or so away, ready to be refurbished for future flights.

“The rocket that Benno Kolland developed for an independent study in physics is an impressive feat of engineering,” said Professor Tufte. “In addition to the obviously beautiful rocket and powerful engine, Benno developed a sophisticated custom avionics package that was tracking detailed data on the flight parameters. Benno has the talent, curiosity, and drive to take full advantage of the resources we make available to our students for pursuing independent projects.”

Kolland plans to pursue his interest in rocket construction over the next few years, and he hopes that his research will contribute to current technological innovations aiming to make commercial space flight a possibility.

“Constructing, testing, flying, and even crashing keeps me interested in things that fly,” he said. “When I chose Lewis & Clark, I knew I wanted to be able to go beyond just math and physics theory. Being able to do independent study as a first year has been an amazing opportunity, and I’m excited to keep it going.”