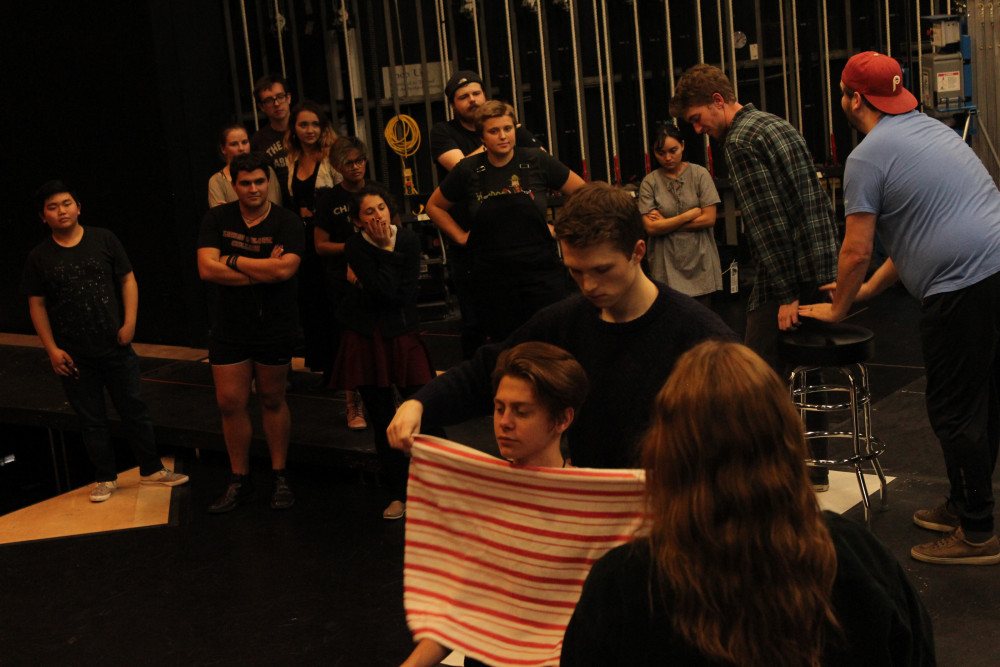 For their first collaboration since 2014, Lewis & Clark’s music and theatre departments are bringing Sweeney Todd, the musical by Stephen Sondheim and Hugh Wheeler, to Fir Acres Theatre. The show opens November 2.

In this adaptation, the family lives on Fleet Street in a subterranean town in a post-apocalyptic world. Lucy’s beauty attracts the attention of evil Judge Turpin (Sebastian Aljian BA ’22), who falsely accuses the barber of a crime that he did not commit and assaults Lucy after her husband is sent away to prison. After 15 years in exile, the barber returns under the new identity of Sweeney Todd, seeking revenge against Turpin. He embarks on a murderous rampage, conspiring with Mrs. Lovett (Elsa Dougherty BA ’20) to shuttle the victims of his razor blade to use in her meat-pie shop.

Lingafelter chose the musical because of her familiarity with the story, as well as the thematic and aesthetic elements that echo narratives at the forefront of Americans’ consciousness.

“The aesthetic of the world we’re making is resonant with our current pop-culture obsession with horror,” Lingafelter said. “There is this plotline of a judge committing sexual assault that is particularly resonant. It’s certainly something that we’re thinking about, it’s something that feels really difficult in the room because you don’t want to sugarcoat it and you don’t want it to be gratuitous. It’s in the script and it’s also in our world and all of us are experiencing it. It’s a dense part of the work that we’re doing.”

The audience will have the opportunity to sit behind the stage, among the actors and the orchestra.

“[Traditionally, an audience will] come into the theatre, sit in a seat, and have the performance come to them in a unified way where they have the sense that everyone is seeing the same performance as they are,” Lingafelter explained. “The opportunity that comes out of doing experiential work is as an individual audience member, I am seeing a show that no one else is seeing and it is just for me.”

Behind the Scenes: Costumes, Voice, and Orchestration

Inspired by the motif of scavengers and survivalists, Associate Professor of Theatre and Scenographer Michael Olich has designed intricately layered costumes with help from his design assistant Eva Magaña BA ’20 from Ontario, California. Magaña, who serves as president of Students for Cultural Inclusion in the Theatre (SCIT), began researching dystopian sets and costumes for the musical last spring.

“Professor Olich used my research to create renderings [of the costumes],” said Magaña, who does fittings for the cast. “Once we established what belongs in this dystopian world of Sweeney Todd, he entrusted me to pull clothing from the costume shop.”

“When I first started at Lewis & Clark I thought I would major in technical theatre and design, so I took Scenography and Theatre Graphics,” Magaña continued. “Professor Olich was really impressed with [the scenery costumes and projections] I designed for his class, so when the musical came around he asked me to join the team.  Now I’m getting four course credits for being his design assistant this semester.”

Vocally, Sondheim musicals are particularly demanding, so Music Director Susan McBerry has been working with the cast—four members are receiving private voice lessons—to prepare them for this musical performance. When Beveridge was cast as Sweeney Todd last spring, he immediately enlisted McBerry’s help since this will be the first time he has sung for a performance.

“I think there is an expectation for a very high level of musical understanding in anything Sondheim wrote,” McBerry said. “My job is to help the ones who don’t know much about singing with a very short and rigorous course on how to sing beautifully and not hurt themselves.”

Conductor Lance Inouye selected seven musicians to play in the pit orchestra for the musical. They are doing a reduced orchestration of Sweeney Todd with three violins, a flute, a clarinet, a piano, and percussion. Because of the time commitment, the musicians are receiving course credit for the musical.

“[The music is] much easier than Mozart or Beethoven or anything that we’re doing in regular orchestra,” said Inouye. “The real challenge is coordinating the ensemble and the singers and making sure the text can be heard.”

Biochemistry and molecular biology major and music minor Jamuna Buchanan BA ’19 from Rapid City, South Dakota, earned a music scholarship from the college, so she receives violin lessons and a spot in the orchestra every semester. She was in the second violin section her first year and auditioned to become concertmaster her sophomore year.

“I took a lot of music classes and I got really close and built relationships with people in the music department, so that’s one reason why Professor Inouye thought of me when he was choosing people to be in the musical,” Buchanan said. “I always tell new students the more opportunities you take advantage of, the more opportunities you’re going to get. If you reach out to a professor and they get to know you, they’re going to think of including you when another opportunity comes up.”

The musical opens on November 2 at 7:30 p.m. You can see the full schedule and buy tickets here.