Shelby Davis and Roger Paget grew up together in the suburbs of New York City during and after World War II. A favorite pastime often found them standing above nearby railroad tracks while coal-fired engines passed beneath, covering them with a shower of soot. Both went on to forge distinguished careers, Davis in finance and Paget in higher education.

Institutional Professor Emeritus Roger Paget died on April 1, 2018. The following month, President Wim Wiewel announced a gift of $500,000 from philanthropist Shelby Davis to honor his longtime friend. “Both Shelby and Roger, each in his own way, worked tirelessly to deepen knowledge and build understanding across different languages, cultures, traditions, and borders,” said Wiewel. “Shelby’s moving gift in tribute to Roger affirms that the worldwide exchange of people and ideas is our best hope for meeting the greatest challenges facing humanity.” 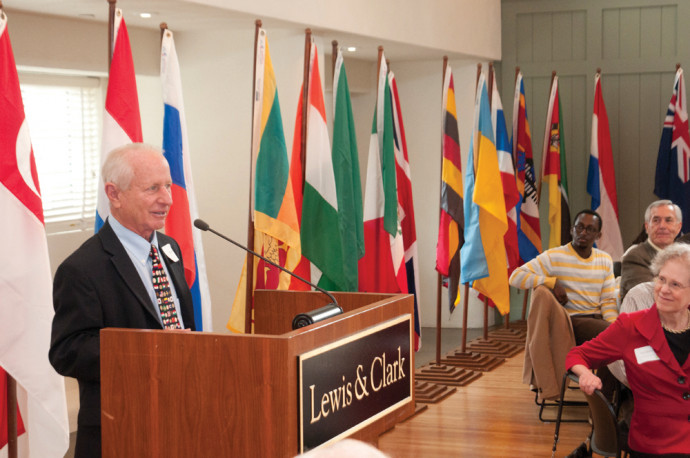 The new Paget-Davis program will allow the institution to annually honor the achievements and contributions of 10 United World College (UWC) scholars who are nearing graduation at Lewis & Clark. This year, the college is home to 75 Davis UWC Scholars representing 44 countries.

The Davis UWC Scholars program was established in 2000 by Shelby M.C. Davis—founder of Davis Selected Advisors, a Boston-based investment firm managing more than $40 billion—and international educator Philip Geier. The program brings exceptional graduates from 17 UWCs across the globe to study at selected colleges and universities in the United States. Since launching the Davis UWC Scholars program, Shelby’s leadership and philanthropy have supported more than 8,500 scholars on 95 campuses in the United States.

Roger Paget, institutional professor emeritus of political economy and Asian studies, arrived at Lewis & Clark in 1985 as dean of the Graduate School of Professional Studies (now Graduate School of Education and Counseling). Emphasizing “critical perspective and balance” in the classroom, he taught in departments across the college, graduate school, and law school. From the 1950s, he made Indonesia the focus of his scholarly career. He led the college’s overseas study program there in 1995, and was so immersed in its culture, history, and politics that former student Felix Ramli BA ’03 said, “I learned more about my home country of Indonesia from Professor Paget’s class than I did living there all of my life. A lot of information in Indonesia was censored, and his class awakened me to that fact.”

Roger retired in 2002 and remained active as a scholar and ambassador for the college as well as in supporting—and recruiting others to support—Lewis & Clark’s many international initiatives. A gathering of remembrance was held on June 22 in Agnes Flanagan Chapel.