Advocate for the Disabled

On a crisp autumn day in 1991, Wilson Hulley began his regular weekday commute, climbing into the Ford LTD station wagon that had arrived to pick him up for his job with the President’s Committee on Employment of People with Disabilities in Washington, D.C. Unknown to him, his life was about to change dramatically.

Two teens out for a joy-ride rammed into his sturdy vehicle at 90 mph, shoving the rear bumper under the back seat and propelling Hulley forward through the bucket seats into the dashboard.

“I had to relearn how to walk and talk,” says Hulley, who underwent nearly two years of physical, speech, and cognitive therapy. “Lucky for me, I met my wife [Deborah Thompson] in my neurologist’s office. We’ve been married more than 25 years.” He’s grateful that renowned neurologist Richard Cytowic took him on as a patient. “He was on call when an attempted assassin shot President Reagan and my dear friend James Brady.”

A nationally known advocate for people with disabilities both before and after his accident, Hulley has held numerous senior management positions in the private and public sectors along with administrative jobs in government. He worked on Richard Nixon’s presidential campaign and served as executive assistant on disabilities to Presidents Ronald Reagan, Bill Clinton, and George H.W. Bush.

“My accident proved that life can change in an instant,” says Hulley. “But I kept pushing on.”

Eager to remain active, he redoubled his efforts to make a difference in the lives of people with disabilities. Collaborating in a number of key capacities, Hulley helped ensure passage of the Americans With Disabilities Act, establish the James S. Brady Therapeutic Riding Program (which received the Mayor’s Medal for Meritorious Service from the citizens of San Francisco), and create the Job Accommodation Network as a one-stop resource for businesses. “When I first started this work, millions of Americans with disabilities had no voice in government or legislative matters,” he says. “We’ve changed that.”

Hulley’s multifaceted career began in 1956 when he graduated from Portland’s Lincoln High School and joined the U.S. Air Force. Specializing in communications and cryptography, he was stationed in Greenland and Goose Bay, Labrador.

In 1960, he secured internships as head teller at U.S. Bank in Portland and then as a marketing sub-director at Philips Lampworks, a giant Dutch electrical and electronic equipment manufacturer in Eindhoven, Netherlands. He introduced Philips’ mini-cassette recorder at a tradeshow in Brussels. “We attached it by chain to a board and encouraged people to drop it on the floor,” he says. “When it held together and kept recording, sales soared.”

Two years later, Hulley began his formal education. During his sophomore year at Portland State University, he was invited to dinner with his mother, step-uncle Aubrey Watzek (for whom Lewis & Clark’s library is named), and Ruth and Jack Howard, then president of Lewis & Clark. Bolstered by their encouragement, he transferred to L&C and graduated with a bachelor’s degree in business and administration studies.

“The Monday after graduation, I headed back to campus as the new alumni director,” says Hulley. He worked with Glenn Gregg BS ’55, who was the development director, and Morgan Odell, who had served as the college’s first president on Palatine Hill. Together, they compiled an extensive alumni roster, significantly increased alumni giving, and built a financial base for the college.

To this day, Hulley praises Odell and Howard as dedicated civic-minded visionaries. “In a speech at Portland’s City Club, Jack defined the true value of a liberal arts education,” says Hulley. “He said it teaches students an invaluable skill: ‘the ability to learn how to learn.’” Hulley has applied that principle in his own life by pursuing a variety of career interests, from advertising to auto racing promotion to government service.

Hulley now lives in Chevy Chase, Maryland, with his wife and loyal service dog, Laurel. Although he officially retired in 2001, he remains active in several organizations, including the International Association of Assistance Dog Partners (which awarded him the Unsung Hero Award in 1994), the Reflex Sympathetic Dystrophy Syndrome Association of America (he has this condition), and the National Organization for Victim Assistance.

“Friends have asked me to jump back into politics, but my plan is to keep advocating from the sidelines,” says Hulley. “I may be retired and turning 80 in November, but I’m still burning up the phone lines and wearing out laptop keys.” 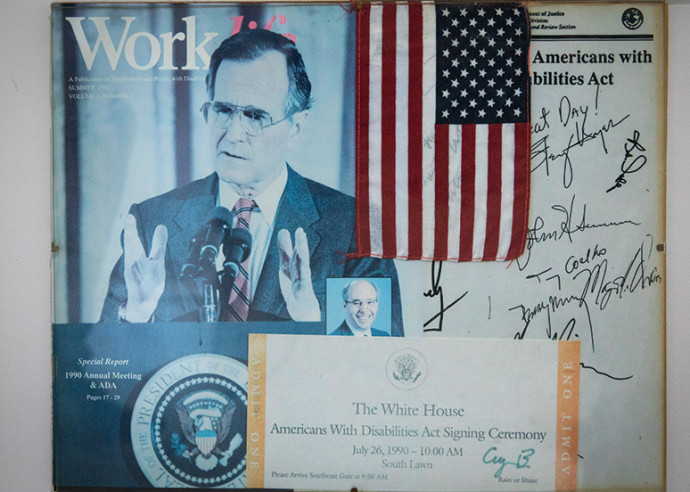 Advocate for the Disabled