Associate Professor of Psychology Diana LeonardApologies from individuals have been studied by psychologists for decades. Apologies from groups, on the other hand, are less well understood. Assistant Professor of Psychology Diana Leonard, a social and political psychologist, has been working to strengthen the field of research on intergroup apologies for years, from her PhD dissertation to her most recently published article.

Leonard explains that members of a group, such as sport fans, tend to experience emotions based on the group’s identity.

“Groups apologize all of the time,” Leonard said. “Presidents apologize to minorities in their countries for past abuses and harms, for example. Countries apologize to each other for things that have happened in the past, and corporations apologize to their clients and their customers for breaches of contract… Intergroup conflict is very impactful in all of our lives on both a small and large scale.”

Her recent study connects the strength of intergroup apologies to the concept of entitativity, or the cohesion of a group perceived by an outsider. For example, the U.S. Army would be viewed as more cohesive than a group of random people waiting at a bus stop. Her study found that the more cohesive a group is, the more likely their apology will be seen as legitimate.

“My research shows that an apology from a cohesive group is really beneficial,” Leonard said. “Other research has shown that attacks from cohesive groups are more threatening.”

Malavika Arun BA ’19, a psychology and theatre double major hailing from India, is working with Leonard in her Emotions and Social Identity in Psychology (ESIP) lab. An intensive four-credit course for psychology majors, the lab is currently composed of four students—two seniors and two first years—where seniors are encouraged to mentor the younger members.

“We all work as a team and bounce ideas off each other,” Leonard said. “Sometimes it’s me mentoring them, and sometimes I know what the answer is but I let them brainstorm it as a learning experience. We run it like a graduate school lab.”

The students have a large degree of autonomy conducting their research. “[Professor Leonard] gives a lot of guidance, but you are still the one doing the work,” Arun said. “She gives us decision-making power and lets us do hands-on work.”

Leonard and Arun are currently conducting a study building on Leonard’s most recent article on intergroup apologies. They are looking at apologies as a persuasive text, comparing strong and weak apologies from groups of varying levels of cohesiveness. They are using an online recruitment tool to conduct their surveys and gather data from participants across the country. 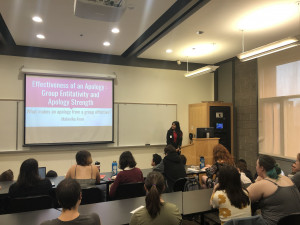 “Individuals are predictable,” Arun explained. “You know what their values are. They are one single unit, as opposed to a group where there is a lot more variability. Groups can change, based on the members, over time. People would rather put their trust in an individual than a group.”