The Author of Annie Bloom’s Success

In early spring, bright sunshine filters through the front windows of Annie Bloom’s Books, an independent bookstore in the heart of Multnomah Village in Southwest Portland.

“We’re getting ready to feature a display of ‘ankle biters’—books people tend to ignore because they reside on the bottom shelves,” says owner Bobby Tichenor. “We encourage our customers to engage in lengthy browsing and pride ourselves on thoughtful, knowledgeable customer service.”

Annie Bloom’s Books, which opened its doors in 1978, celebrated its 40th anniversary last year. It literally grew up with the neighborhood. Customers helped carry books from one building to another when the store moved across the block in 1983. Multiple generations of families remain loyal customers, often bringing in out-of-town guests to browse.

The store has survived—even flourished—as online booksellers have reshaped the retail landscape. “Over the years, we’ve graduated from handwritten inventory and phoned-in orders to a state-of-the-art system that’s the heart of our business,” she says. Owning the building that houses Annie Bloom’s and residing within a supportive community have also been key.

A native Oregonian and self-described introvert, Tichenor grew up in Bend and moved to Milwaukie when she turned 15. She raised sheep and horses, participated in 4-H, and dreamed of becoming a veterinarian but “lacked the discipline” for that pursuit. Instead, she immersed herself in books, reading Teddy Roosevelt’s safari adventures and Margaret Mitchell’s Gone With the Wind before moving on to dense Russian novels in high school. 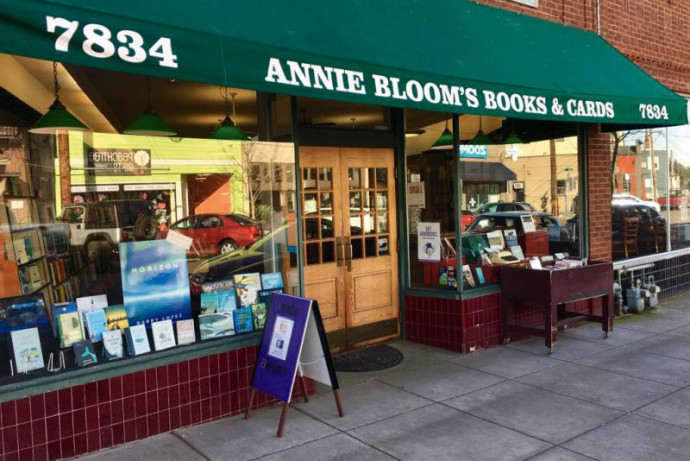 She graduated from Bennington College in Vermont, married Keith Tichenor, and moved back to Oregon. While her husband attended law school in Seattle, she contemplated teaching but was also interested in the law. “I had this romantic notion that Keith and I would open a small practice together.” She decided to enroll at Lewis & Clark Law School while raising their two young sons, Seth and Sean. After passing the bar in 1982, she worked briefly for a local firm but soon realized that law was not for her. “I walked away with the ability to think in a much more organized way.”

When Tichenor was still in law school, a retail space opened up in Multnomah Village, and, with her “customary approach,” she jumped in and opened a bookstore with money she’d received from the sale of her father’s trucking company. The store’s namesake, “Annie Bloom,” is a combination of Tichenor’s middle name and the surname of her first partner, Susan Bloom. Over the years, she’s had a series of partners who have helped move the business forward. “My secret has always been finding talented people whose strengths complement my weaknesses—and letting them do their thing,” she says.

Annie Bloom’s also gives back to the community. The store hosts semiweekly events and author readings and supports local schools and book fairs. “Sometimes people come in just to talk and absorb the atmosphere,” she says.

Forty-one years after setting up shop in Multnomah Village, Tichenor is content with her choices. “Passing on books is much more personal than selling other products,” she says. “Books are companions that feed souls and open up new worlds for readers of all ages.”