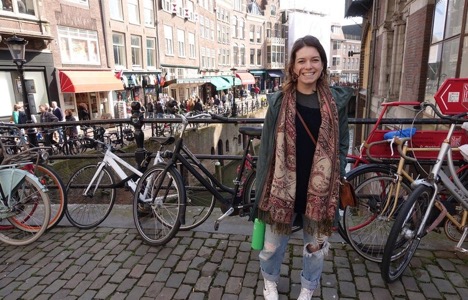 The childhood aspiration to become a published writer has led Emma Grillo BA ’17 from coast to coast, taking root in Lewis & Clark’s corner of the Pacific Northwest and coming to fruition in the heart of New York City. An English major with an emphasis in creative writing, the opportunities provided in and out of the classroom served as the foundation for what would kick-start her career. In the few short years since graduating, Grillo’s work has been published in Vice, Vox, and New York Magazine, among others, and in the past year she has joined The New York Times as a news assistant.

A native of Boston and the San Jose area, Grillo fell in love with the Lewis & Clark campus after a prospective visit, and once classes began she quickly appreciated the merits of the liberal arts system. “I think it fosters curiosity,” Grillo says. “Being in small classes, especially as an English major, means the entire class is just discussion of what you’ve read. It holds you accountable, and makes you realize that what you’re saying is being taken seriously by your professors and your peers.” It’s a collaborative process that is not unlike newsrooms, according to Grillo.

While at Lewis & Clark, Grillo found every opportunity to hone her skills as a writer and reporter in the absence of a journalism major. She participated in both the Morocco and New York City overseas and off-campus programs, interning at fashion magazine Harper’s Bazaar during the latter. Later, Grillo applied and was awarded a Fowler and Levin Summer Internship Award, which allowed her to return to New York City and write for the popular lifestyle website Man Repeller.

In her junior year, Grillo became the features editor of the student-run newspaper The Pioneer Log, which she identifies as a particularly influential experience. A turning point was the chance to interview Oregon Governor Kate Brown following her election, an especially high profile feature for the newspaper. “All of us on the staff really felt like that was a big moment,” Grillo says. “We were taking ourselves seriously as journalists.”

Within the English department, Grillo developed a keen eye for both fiction and nonfiction writing under the mentorship of Associate Professor of English Pauls Toutonghi and author Cheston Knapp, a former visiting professor. Today, she balances her passion for both by reporting at The New York Times and contributing fiction writing to literary magazines. Grillo is currently working on a collection of short stories as a writer-in-residence in Southern Arizona, and would like to one day pursue a master of fine arts in creative writing and fiction.

To any future writers, she offers this advice: “Talk to the different professors at Lewis & Clark. They all have experience publishing. And any time you see someone write an article that you really like, email them. They have all come up, know it’s a hard industry to break into, and are really receptive.”