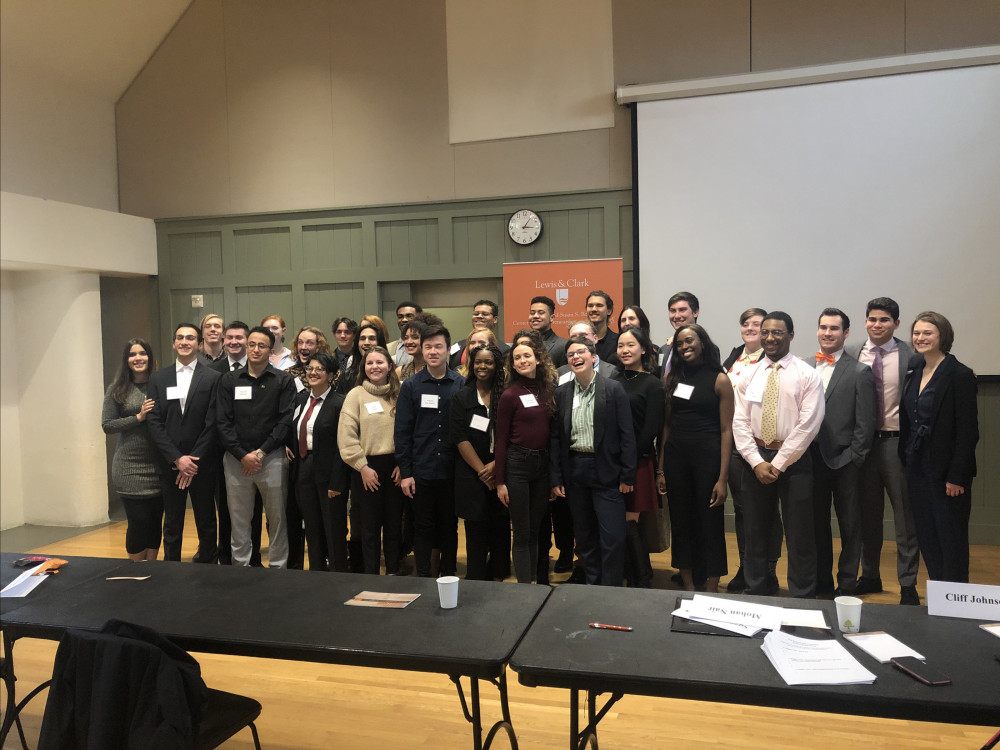 The John E. and Susan S. Bates Center for Entrepreneurship and Leadership, led by Professor of Psychology Brian Detweiler-Bedell, is designed to help students translate their liberal arts training to be leaders for impact. It is open to all years and all majors, regardless of prior participation in programming and classes. From January 12 to 17, 33 Lewis & Clark students from across the United States and around the globe immersed themselves in the study of entrepreneurship and leadership through Winterim.

Winterim—a perennial favorite offering of the Bates Center—is a weeklong experience bringing students, speakers, and mentors together to explore what it means to be an entrepreneur. Students engage with topics like ethics in entrepreneurship, networking, fundraising, product development, and customer insight.

“I was attracted to Winterim because of the opportunity to form connections,” said Cape Cod, Massachusetts, native Chloe LeBoeuf BA ’21, who is majoring in sociology and anthropology and minoring in economics. “Many people comment on how sociology and economics seem to be on two opposite ends of the spectrum, but I anticipate meeting professionals who also work in this way. I hope to engage with people who have been down a similar path, may have advice for me moving forward, and could see us working together in the future.”

In addition to keynote talks and skills workshops, Winterim students worked in small teams to identify a problem, develop a business idea, create prototypes, and prepare and present pitches at the end of the week, with winners earning money, professional services, and other valuable rewards. Along the way, they are assisted by dozens of off-campus leaders and professionals—many of them alumni—who serve as speakers, mentors, and judges.

“I mentored @lewisandclark students on their biz concepts today & was blown away by the level of sophistication,” tweeted Winterim mentor, entrepreneur and investor Jaime Schmidt. “The entrepreneurial mindset of these kids is no joke & way beyond my level of thinking at that stage of my life. It was so fun sharing in their hype!”

This year’s keynote topic was Ethics in Entrepreneurship, featuring Erika Cheung, one of the key whistleblowers in the Theranos scandal that brought to light revelations that the company had been processing thousands of patients’ blood samples with faulty technology. After working in biotechnology, Cheung committed herself to growing the entrepreneurial ecosystem in Hong Kong and throughout Asia. In addition to serving as an advisor for Betatron, a startup accelerator that invests in early-stage companies, Cheung is launching a nonprofit called Ethics in Entrepreneurship, a social movement aimed at implementing ethics within the tech industry.

For students like international affairs major and political economy minor Cole Harris BA ’20, Winterim was a unique opportunity to network with local professionals and entrepreneurs. The Wimberley, Texas, native “…deeply values how Winterim is designed to make graduates of Lewis & Clark marketable to employers, irrespective of your field of study.”

Among the many high points of the week was the announcement by alumna Natalie Stack BA ’09 of a $100,000 donation to the Bates Center from Bob Moore, founder of iconic Oregon brand Bob’s Red Mill.

The week proved equally fulfilling for mentors and judges like Tawny Schlieski BA ’86. Schlieski is president of Shovels and Whiskey, a VR prototyping firm, and founder of Oregon Story Board, a nonprofit dedicated to expanding access to new technology.

“I believe the most important element of Winterim is the opportunity to deeply examine the intersection of values and business,” Schlieski said. “There are plenty of places that can give students a crash course in highly hyped and often toxic VC cycles, but Winterim demands that students think through the broader implications of their ideas—to imagine themselves as both architects of and participants in a sustainable economy that provides real value to the community, not by accident, but by design.”