This fall, the Hoffman Gallery at Lewis & Clark presents Alison Saar: Bound for Glory, an exhibition exploring the sculptures and works on paper of an important contemporary artist. Opening September 7, the exhibition features Alison Saar’s public artworks and the more personal pieces she creates in her Los Angeles studio.

“Alison Saar is one of few contemporary artists to use the figure almost exclusively in her work—yet figurative representation is not her highest priority,” said Linda Tesner, director of the Hoffman Gallery. “She explores human impulses, cultural prejudices, and life experiences, drawing inspiration from folk art, African and Haitian aesthetics, myths and rituals from diverse cultures, American slave narratives, and music.” 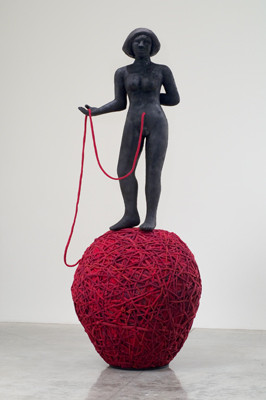 Saar’s newest public sculpture, York: Terra Incognita, was dedicated on Lewis & Clark’s campus in May 2010. The memorial honors York, William Clark’s slave and a crucial contributor to the Corps of Discovery. Despite his vital service during the expedition, after the completion of the journey, York shared in none of the fame and fortune enjoyed by other members of the corps.

“When we set out to find an artist for this project, the York Recognition Memorial Committee wanted the work to be provocative to viewers and to encourage further exploration,” Tesner said. “We were not looking for a safe rendering. We expected the memorial to be both a lighthouse and a lightning rod.”

After a nationwide search, the committee selected Saar, whose memorial to Harriet Tubman had recently been installed in Harlem.

In her proposal to the York Committee, Saar wrote, “I have a personal interest in the recognition of unsung heroes, particularly those who have been overlooked due to their race or gender.”

Saar’s vision for the York memorial manifested in a sculpture that stands six feet tall and is mounted on an approximately two-foot bronze base. Neither the physique nor facial features of the sculpture claim to represent what York actually looked like because Saar felt that a realistic portrait would only continue to misrepresent the man. Partly for this reason, Saar made the sculpture’s back a focal point and a symbol of the burden borne by York during the Lewis and Clark expedition. One of William Clark’s maps is scarified on the sculpture’s back and shoulders.

“As is often the case with the work of enslaved men and women, the grueling daily responsibilities placed on York to haul, build, and feed the expedition have been historically overlooked,” Saar said. “The indignities York suffered during the expedition and continues to suffer in the many misinterpretations of his life have obscured his rightful place in American history.”

York: Terra Incognita was Saar’s seventh public art commission. Tesner hopes that Saar’s exhibition at Lewis & Clark will inspire greater understanding of the artist’s body of work and enhance appreciation of the York memorial among the Lewis & Clark community and campus visitors.

“Even though her work deals with difficult historical subjects, it also embodies great dignity and optimism,” Tesner said. “In Alison Saar’s work, the political is personal, without being overly sentimental, self-referential, or pedantic. She courageously addresses universal themes and invites her viewers into a conversation. I look forward to gallery visitors joining in that discussion this fall.”

The gallery published a 36-page, full-color catalog on the exhibition, written by Linda Tesner. Visitors can pick up a catalog at the gallery.