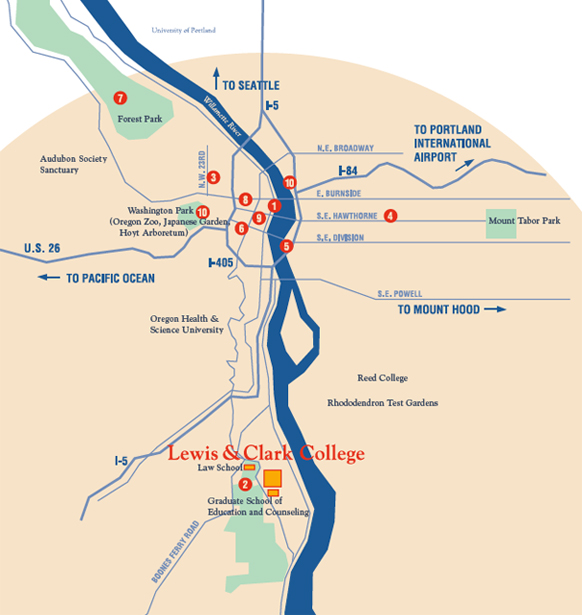 Ten places to check out within 10 miles of campus:

3. Northwest 23rd Ave. Also known as “Trendy-third” for its great shopping and restaurants, featuring both the upscale and the eclectic.

4. Southeast Hawthorne Blvd. Another cool shopping area, it offers a slightly different flavor from Northwest 23rd, including Bagdad Theater, where you can eat pizza and enjoy other pub fare while catching a $7 flick.

5. OMSI The Oregon Museum of Science and Industry has six halls packed with amazing exhibits, a Sky Theater for astronomy and laser light shows, an Omnimax Theater, the world’s most advanced film projection system, and the submarine used in the movie The Hunt for Red October.

6. The Portland Art Museum This lively institution attracts the world’s finest traveling exhibits and houses a wonderful permanent collection; catch the jazz and art scene at Museum After Hours events.

7. Forest Park At 5,000 acres, it’s the largest forested municipal park in the U.S., and offers miles of hiking and mountain bike trails.

8. Powell’s Books The largest bookstore in the U.S. (takes up a whole block!), with more than 1.5 million new and used volumes.

9. Pioneer Courthouse Square A city block converted into an urban park, complete with an espresso bar perched above a granite-faced fountain—a favorite spot for people-watching and spontaneous performance art.

10. The Rose Gardens There are two worth mentioning: one is the oldest rose test garden in the U.S., boasting more than 500 varieties, plus an outdoor amphitheatre, some of the city’s best views of Mount Hood, and a short ride to the Oregon Zoo; the other is the 21,000-seat arena that is the home of the Portland Trail Blazers and a frequent host to national concert tours and other events.