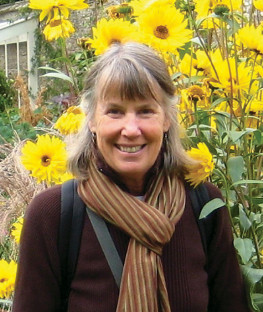 In November, Patty Cassidy led a group of senior citizens outside to put their raised gardens to bed for the winter. Standing or working from wheelchairs, they pulled up old perennials, raked and turned the dirt, and planted a crop of Austrian winter peas to infuse the soil with nitrogen.

“We’re lucky to live in such a temperate climate,” says Cassidy, who for five years has worked as a freelance horticultural therapist at Providence ElderPlace Irvington Village and Providence ElderPlace Cully in Northeast Portland. “Gardening helps orient seniors to the seasons, encourages memories, and builds stamina and eye-hand coordination. It gives them something to look forward to.”

Cassidy is a master gardener, a certified horticultural therapist, and a board member of the American Horticultural Therapy Association. She is also an invited contributor to the New York Times’ popular “Ask an Expert” column and author of The Illustrated Practical Guide to Gardening for Seniors (Anness, 2011).

At the senior care facilities where she works, Cassidy often brings in bouquets of flowers from her garden as well as seasonal fruits and vegetables, which prompt stories from residents. They talk about when they grew potatoes during the Depression, canned tomatoes, and dried fruit. Pressing flowers from the garden to craft bookmarks and note cards aids dexterity and fosters creativity.

“My job is hugely rewarding,” says Cassidy. “It’s an honor to share my expertise, discover people’s skills, and unearth memories.”

Cassidy draws on her education background to design a senior-friendly curriculum. She began her career as an elementary school teacher in Boston before moving to Portland, where she worked as a career counselor for 11 years at Reed College. Keenly aware that young adults were struggling with broader issues, she earned a master’s degree in counseling psychology at Lewis & Clark’s Graduate School of Education and Counseling. Soon after, Cassidy changed course again, working for 10 years as a personal counselor in 3 Portland-area high schools.

That’s when the sad news came that her young niece was dying of cystic fibrosis. “While waiting for the situation to unfold, the only thing I could focus on was gardening,” she says. “Digging out in the yard, I gained perspective. Innocently, I googled healing gardens and discovered a whole new profession— horticultural therapy—and a training program at Legacy Health System.”

After earning a certificate in horticultural therapy, Cassidy worked in an assisted living and memory care community in Vancouver, Washington. A column she wrote for the facility’s newsletter led to an offer from a book publisher in England. “Putting pen to paper made me question everything I thought I knew about gardening for seniors,” she says. “I felt responsible and conducted extensive research.”

Cassidy went on to embrace not only her work but also her community. In 2005, she joined the Friends of the Portland Memory Garden and now serves as the group’s president. “It’s one of eight memory gardens in the United States and one of only two built on public land. It’s part of Portland’s public park system,” she says.

Memory gardens include special design features like nonglare concrete, level walkways wide enough for two wheelchairs, a locked single entrance for safety, and nontoxic sensory plants like lamb’s ears. All of these benefit people with memory problems as well as their caregivers.

“I’ve come to realize that sharing time in nature enhances family relationships, especially for those dealing with dementia issues,” says Cassidy. “Talking about the seasons, garden features, or plants can provide entry points to stories and meaningful memories.”