A Life of Service: Paramedic, Lawyer, and Volunteer 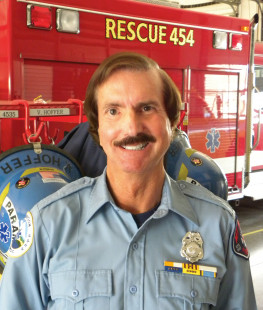 The wind howled and snow fell fast and hard, making it difficult to see the road. Paramedic Victor Hoffer plowed through the storm, intent on helping a pregnant woman in labor in a nearby hotel. First, he reassured the woman and her husband, Pakistani Muslims, that he understood and respected their religion and customs. Cautiously, the husband opened the door, helped his wife onto Hoffer’s stretcher, and accompanied her into the waiting ambulance.

“I leaned over to him and said ‘Sir, your wife is about to give birth. May I save the baby?’” says Hoffer. “Ten minutes later, I delivered their healthy little girl.” The following spring, these proud and grateful parents reintroduced Hoffer to their young daughter at a safety fair.

Hoffer has worked as a paramedic for more than 33 years and runs a small legal practice in Mt. Angel. He also advocates for highway safety, volunteers with the Mt. Angel Fire District, teaches safety to schoolchildren, and speaks to professional organizations across the state.

A standout in his field, Hoffer is a three-time recipient of the prestigious American Ambulance Association National Star of Life Award. “Every year, about 50,000 paramedics and EMTs are eligible to be nominated for this national award, but only about 100 receive one,” says Hoffer. He was also recognized by the Oregon governor’s office with the state’s Outstanding Lifetime Volunteer Achievement Award in 2010, and by the Oregon Health Authority with a Meritorious Service Medal (2012), a Community Service Medal (2007), and the EMS Cross (2004) for his service to EMS and the community.

As a young man, Hoffer initially set his sights on pastoring a church. He earned a master’s degree from the Assemblies of God Theological Seminary. While attending Fuller Theological Seminary in Pasadena, California, he served as a hospital chaplain at UCLA Medical Center in Los Angeles and Memorial Hermann Hospital in Houston before returning home.“My father was the fire chief of Mt. Angel from 1972 to 1987. He asked for my help starting an ambulance service in our town,” says Hoffer. “I jumped in and never looked back.”

During that time, Hoffer applied to be a firefighter, but was turned down because of a congenital hearing impairment. “I was about to file a discrimination lawsuit,” he says. “But my lawyer, who was impressed with the comprehensive research I brought to the fight, told me: ‘Don’t get mad. Go to law school.’”

Hoffer took his advice. While working full time, he earned his law degree from Lewis & Clark Law School in 1992 and opened a law office in Mt. Angel. He specializes in elder and business law, providing most of his services pro bono or at reduced rates. “It’s another way for me to contribute,” he says.

Like many of the accident victims he’s assisted, Hoffer is no stranger to tragedy. He lost his father, Vic, his brother, John, and his eldest son, Victor III, in separate rural car crashes between 1991 and 2009. He almost lost his youngest son, Paul, who was in the car when Hoffer’s father died.

Fittingly, Governor Ted Kulongoski appointed Hoffer to the Oregon Transportation Safety Committee in 2008. Hoffer led the Highway Safety Plan design in 2011 and negotiated to make the recruitment, training, and retention of rural fire and emergency medical service volunteers the state’s number one safety priority. “Oregon is making progress,” he says. “In 2010, we set a record for the lowest fatality rate on state highways since the mid-1940s.”

In spite of his success, Hoffer remains humble. He loves participating in small-town life and feels honored to help people who’ve known him his entire life.

“I’m nobody special,” he says. “I live across the street from my 90-year-old mother, the former mayor of Mt. Angel. I go to church, photograph local sporting events, respond with the fire department, and volunteer at numerous events, including the Oregon International Air Show and the Portland Marathon. I hope that when I pass to the other side, people will remember me most as a dedicated community servant.”