Oregon’s 2014 Superintendent of the Year

Growing up in southwest Oregon, Don Grotting and his four siblings lived in a house with no indoor plumbing until he was a sophomore at Coquille High School.

They shared one bedroom and looked forward to monthly deliveries of free government cheese, peanut butter, and other staples. “I have vivid memories of hating grade school because my family was extremely poor,” he says. “I remember being hungry and ‘charging’ hot lunches— mortified later when teachers announced in class that my parents had ‘forgotten’ to pay my bill.”

“The district’s success is a team effort,” he says. “Principals, teachers, and staff have cooperated and excelled despite steep cuts we needed to make to balance our budget.”

Meeting diverse needs with limited resources can be challenging. Grotting, however, is committed to eliminating the achievement gap in a district where 80 percent of students come from low-income families and more than 70 languages are spoken as a first language. Most of his schools also have food and clothing pantries.

“Empathy, early intervention, and high expectations are key,” he says. “When our students start kindergarten, we talk with them and their parents about the year they’ll graduate from college, not high school.”

He’s adamant that all students take a core curriculum with supplemental reading and math blocks as needed. Elementary school students must achieve grade-level reading and math skills. “Seventy percent of third-graders not at reading level are in danger of dropping out of high school,” he says.

Grotting is proud to have maintained a district-wide arts program and is looking forward to opening the Earl Boyles Early Learning Wing and Neighborhood Center in the fall. The center will offer free preschool to every child in the school’s attendance area as well as classes and services for adults in the community.

Grotting’s journey to a career in educational administration started after an unexpected jolt. He graduated from high school in 1974, joined the U.S. Army, and served three years in Germany. When he returned home, he went to work for Georgia-Pacific. “Coquille had the largest plywood plant in the world,” he says.

Grotting began as a “green chain puller,” removing and stacking usable green veneer from a conveyor. A hard worker, he was quickly promoted to the plant’s carpentry crew—earning $40,000 to $50,000 a year during the 1980s when the wood products industry was strong in Oregon. The environmental climate changed during the 1990s, and the plywood mill shut down.

“That was a sobering, humbling experience,” he says. “It was the first time I stood in the unemployment line.”

Grotting had a son and daughter in school at the time, and he helped coach them in baseball, basketball, and track. Teachers and friends noticed his natural ability to connect with kids and encouraged him to go back to school. He earned a bachelor’s degree, and at the age of 38, began teaching middle school and high school in Powers, Oregon, where he was quickly promoted to principal and superintendent. While working full time, he earned a master’s degree and an educational administration certificate. He served as superintendent of Nyssa School District in eastern Oregon before coming to David Douglas.

A passionate leader forged from poverty and hard work, Grotting believes that every child has an unlimited capacity to learn. He feels privileged to guide them.

“I keep a pair of my boots from the plywood mill in my office to remind me of where I started,” he says. “I never want to get complacent or too comfortable in my job.” —by Pattie Pace 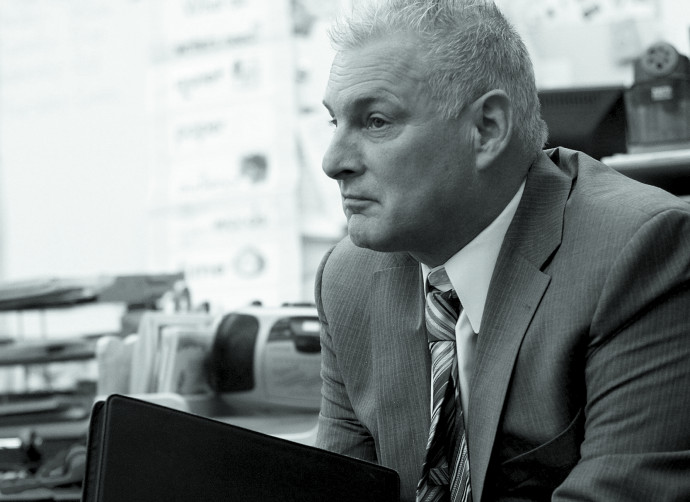